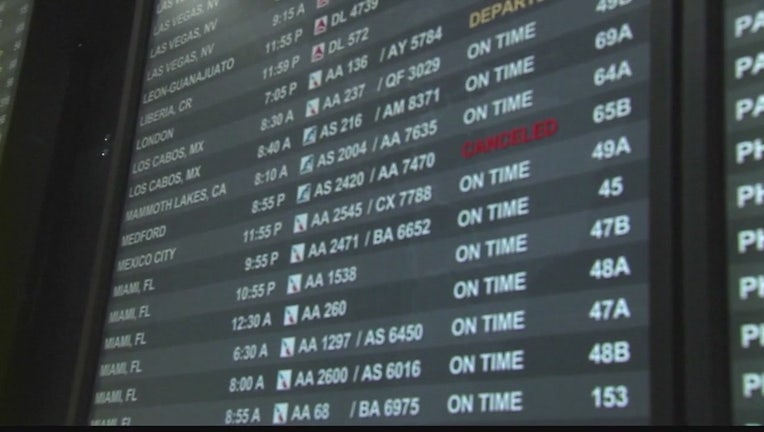 LOS ANGELES, Calif. (FOX 11 / CNS) - Officials at Los Angeles International Airport on Monday estimated that the 19-day holiday period will see a 9.5-percent increase in passenger traffic over the same period in 2015, despite a number of delays due to a flight order issued by the Federal Aviation Administration.

The holiday period -- which runs from Dec. 16 through Jan. 3, 2017 -- will see an estimated 4.3 million travelers pass through LAX, an additional 400,000 passengers over last year's total of 3.9 million, according to Los
Angeles World Airport spokeswoman Katherine Alvarado.

Airport officials also report that from midnight to noon today, there have been a reported 53 arrival delays, 30 departure delays, two arrival and three departure flight cancellations. Alvarado said these delays were not caused by runway construction, but by an air traffic volume delay order issued by the FAA to manage the increase in flights added by airlines to reduce airport congestion.

The busiest days this holiday period were Dec. 21 and Dec. 23, with passenger totals nearing 239,000 travelers, according to Alvarado. The slowest days were Christmas Eve and Christmas Day, and New Year's Eve was also expected to be lighter with an estimated 198,000 travelers, well under the daily average of 221,000 passengers.

LAX is the seventh-busiest airport in the world and the third-busiest in the United States.

The increased volume in passenger traffic has impacted flight operations in a number of ways, according to Alvarado:

"The additional volume of passengers and management of terminal gates will be addressed with our airline partners," said LAWA Chief of External Affairs Trevor Daley. "It is in all of our best interest to find solutions to
better accommodate the increasing number of people who want to use LAX."