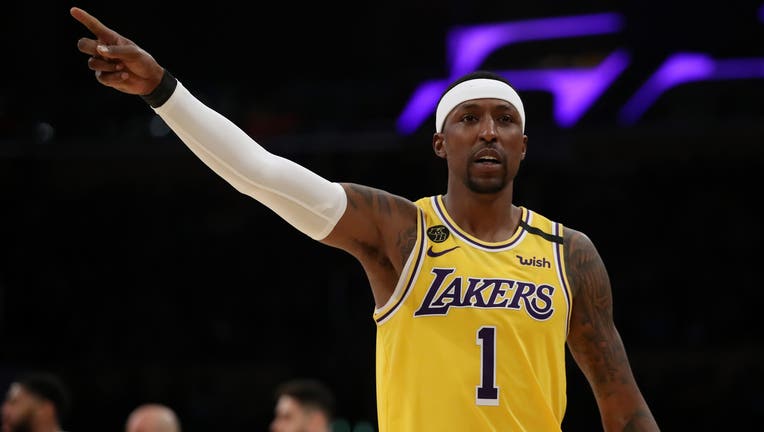 FILE PHOTO -- Kentavious Caldwell-Pope #1 of the Los Angeles Lakers reacts to a play against the Philadelphia 76ers during the second half at Staples Center on March 03, 2020 in Los Angeles, California. (Photo by Katelyn Mulcahy/Getty Images)

LOS ANGELES - Los Angeles Lakers guard Kentavious Caldwell-Pope was robbed at gunpoint earlier this month in a heist that netted $150,000 worth of luxury items, according to a report.

Caldwell-Pope, 28, was standing in the driveway of his Los Angeles home with a group of friends on June 17 at around 4 a.m. when a car pulled up, law enforcement sources told TMZ Sports.

Three armed men reportedly exited the vehicle and demanded that KCP and his friends hand over their belongings.

Sources told the outlet that the thieves made off with about $150,000 worth of stuff, including a Rolex watch, jewelry and an iPhone.

No one was injured and police are investigating, according to the report.

The robbery took place shortly after the Lakers were eliminated from the NBA playoffs. KCP finished up his fourth season in Los Angeles averaging 9.7 points and 2.7 rebounds in 67 games. He resigned a three-year, $40 million contract in November.

Get updates on this story from Fox News.