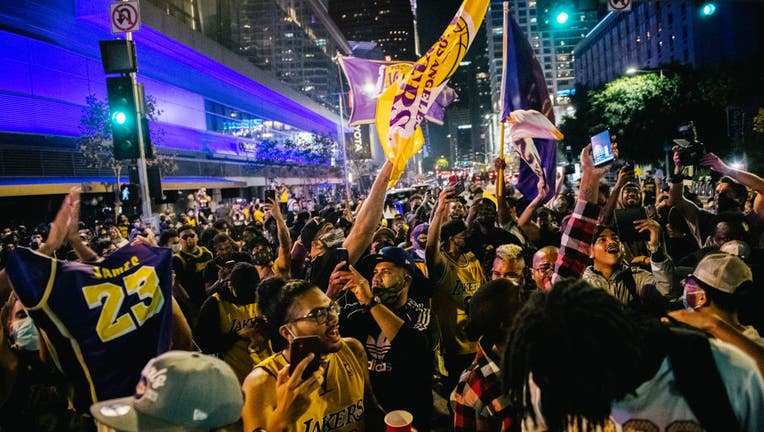 LOS ANGELES, CA - OCTOBER 11: Lakers fans celebrate in front of the Staples Center on October 11, 2020 in Los Angeles, California. People gathered to celebrate after the Los Angeles Lakers defeated the Miami Heat in game 6 of the NBA finals. (Photo b

LOS ANGELES - A Lakers fan is suing the city of Los Angeles, alleging he lost his right eye to a police projectile fired during the celebration of the NBA franchise's 2020 championship game victory over the Miami Heat.

The lawsuit filed Tuesday in Los Angeles Superior Court on behalf of William Gonzalez and his brother, Michael, includes two graphic color photos of his injuries.

A representative for the City Attorney's Office could not be immediately reached for comment.

Police said previously that they declared an unlawful gathering in the area after storefronts were damaged and officers were pelted with  bottles and other items.

The Gonzalez brothers say they joined fans near Staples Center last Oct. 11 to celebrate the Lakers' NBA championship win over the Miami Heat. They later walked to a taco truck parked at Ninth and Hope streets, then walked a short distance to Ninth and Flower streets and sat down to eat, the suit states.

William Gonzalez, then 22, saw people who had been standing near him begin to run and he then noticed LAPD officers coming in his direction "with weapons held high,'' according to the suit, which says he "heard no audible warning to leave the premises.'' Instead, he says he suddenly heard loud, explosive shots and cracks and saw, from the area of the police officers, emissions of powder smoke and sparks."

Gonzalez saw several police projectiles hit the ground, but he felt one pass close to his head, the suit says.

"Mr. Gonzalez turned just over to the direction of the uniformed officers when one hard-foam projectile struck him in the right eye, cutting through his cheek skin and eyelid, shattering his eye socket, ripping apart his tear duct and blowing out the eyeball itself,'' according to the suit. 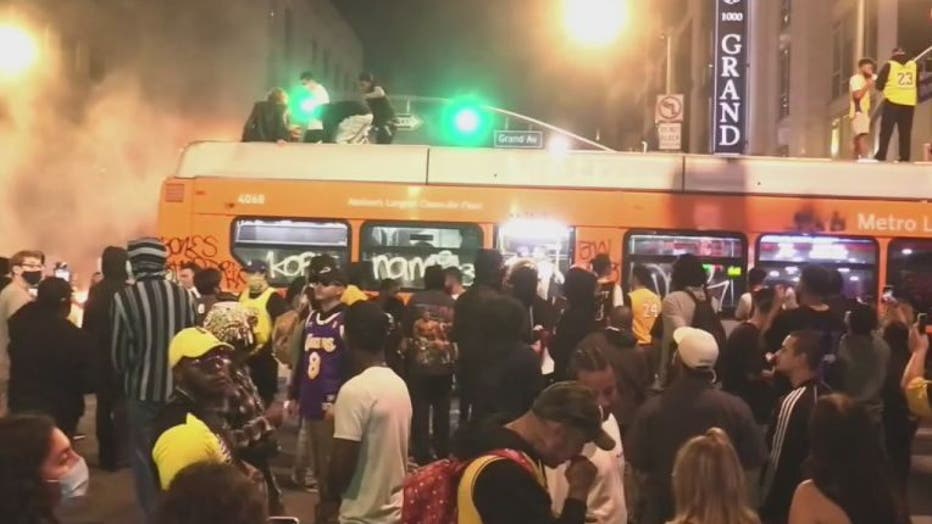 He fell, "screamed in agony and cried for his brother,'' who rushed over, took off his Kobe Bryant jersey and placed it over his sibling's injured eye to try to stop the bleeding, the suit states.

Michael Gonzalez asked CHP officers and sheriff's deputies at a nearby intersection for help or to allow them to walk to their home, but they were forced to wait a half-hour until a deputy called for an ambulance that took William Gonzalez to California Hospital Medical Center, according to the suit.

Doctors removed William Gonzalez's right eye and he still suffers from nerve damage, according to the suit, which says he will some day get a prosthetic right eye as well as undergo cosmetic surgery to fix drooping skin on the right side of his face.

The LAPD officers failed to meet department standards when they fired the projectile launcher toward William Gonzalez's head instead of the middle of his body, the suit alleges. He was not violently resisting arrest nor posing an immediate threat of violence or physical harm, according to the complaint.

"Officers must attempt to control an incident by using time, distance, communications and resources in an effort to de-escalate the situation, whenever it is safe, feasible and reasonable to do so,'' the suit states.