Registered nurses and other healthcare workers who have hit their breaking points amid the pandemic protested staffing waivers on Jan. 8.

LOS ANGELES - Overwhelmed with COVID-19 patients in the nation’s most populous state, many other California nurses already stretched thin are now caring for more patients than typically allowed under state law after the state began issuing waivers that allow hospitals to temporarily bypass a strict nurse-to-patient ratios law — a move they say is pushing them to the brink of burnout and affecting patient care.

Nurses overwhelmed with patients because of the pandemic in other states are demanding law-mandated ratios. But so far, they have failed to get them. In Massachusetts, Pennsylvania and New York, the country’s first pandemic hotspot, nurses have been demanding state-mandated minimum staffing standards for months. Voters in Massachusetts rejected in 2018 mandated nurse-to-patient ratios.

In the 10 minutes Black gets with each person every hour, she has to look at lab work reports, imaging reports, communicate any abnormalities to the doctor, document her interventions, coordinate with case workers, and in many cases, arrange for the hospital’s chaplain, Nerissa Black, a registered nurse at the telemetry cardiac unit of the Henry Mayo Hospital in Valencia, just north of Los Angeles said.

Black said she was already having a hard time tending to four COVID-19 patients who need constant heart monitoring. But because of staffing shortages affecting hospitals throughout California, her workload recently increased to six people infected with the coronavirus.

Black added she barely has time to take a break or eat a meal. But what really worries her is not having enough time to spend with each of her patients.

Black said she rarely has time to help patients brush their teeth or go to the bathroom because she must prioritize making sure they get the medicine they need and don’t develop bedsores.

Gov. Gavin Newsom’s Department of Public Health began issuing temporary waivers of the law for a second time in December after another surge left hospitals in Southern California and the agricultural San Joaquin Valley with what is considered no intensive care capacity because of a lack of staffing. The department had ordered all non-urgent and elective surgeries and issued a blanket 90-day waiver of the patient ratio last spring.

So far, at least 250 of California’s about 400 hospitals have been granted 60-day waivers that allow for ICU nurses to care for three people and emergency room nurses to oversee six patients. The waivers only apply to intensive care, observation units, cardiac monitoring, emergency and surgical care units. But Newsom so far has not canceled elective surgeries during the recent surge.

Kaiser Permanente, which has 36 hospitals in California, applied for waivers at 15 of them to plan for surge needs, spokesman Marc Brown said. He said the health care giant avoided asking for more waivers by canceling elective and non-urgent surgeries, paying nurses overtime and working with the nurses to move their shifts and locations. 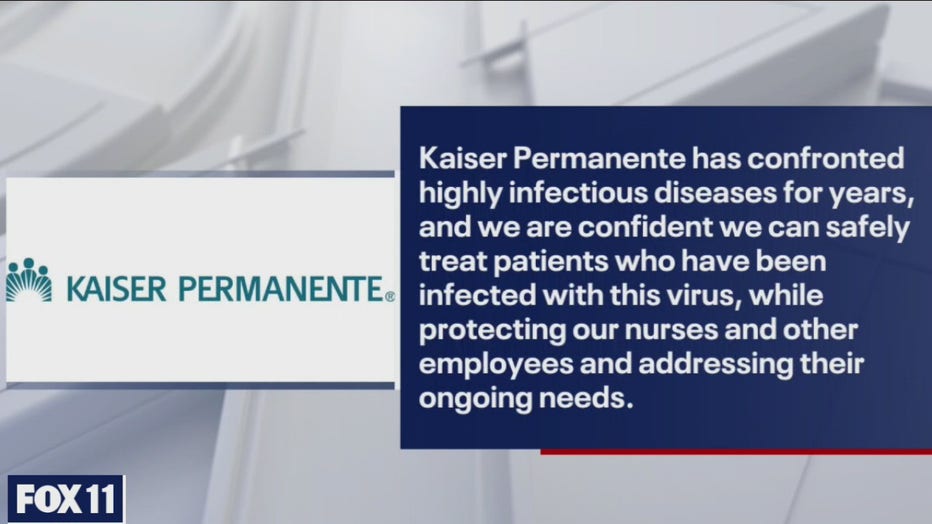 California Hospital Association spokeswoman Jan Emerson-Shea said hospitals are applying for the waivers only after they have no other choice left to care for the patients they have.

"We are literally in the worst crisis of this pandemic so far and are seeing caseloads that we have not seen to date," Emerson-Shea said, adding that hospitals are just trying to get through the crisis. "No one wants to have our staff emotionally and physically exhausted. But we have no choice. People need care."

California hospitals typically turn to staffing agencies and travel nurses during the winter season, when hospitalizations surge and medical staff get sick because of the flu. But California is now among states nationwide vying for medical personnel, particularly trained ICU nurses.
Stephanie Roberson, the California Nurses Association government relations director, criticized hospitals for not preparing better by training registered nurses and failing to hire more staff — including traveling nurses — during a fall lull in COVID-19 cases, despite an expected fall surge in hospitalizations.

Black, who has been a nurse for 10 years, said she has been relying on her husband to take care of her family needs so she can rest and sleep as much as possible on her days off. She has also been seeing a therapist to cope with the stress from work.

She said she is doing everything she can to take care of herself because she is committed to helping her patients. But she calls her working conditions increasingly unsafe.

"A lot of people say we signed up for this and no, we didn’t. I signed up to help take care of people, not to throw myself into the fire," Black said.