LOS ANGELES - Los Angeles County Sheriff Alex Villanueva unveiled a decontamination center on Monday that he said can disinfect up to 30,000 much-needed N95 masks daily and save the county more than $18 million.

The Sheriff's Department is the "first law enforcement agency in the entire nation" to open such a center, the sheriff said.

The N95 masks have been in high demand at hospitals and clinics worldwide to protect nurses, physicians, and first responders treating COVID-19 patients.   Speaking at a briefing at the COVID-19 Regional Decontamination Center at the Sybil Brand Institute in Monterey Park,

Villanueva pointed to an "airtight decontamination chamber ... about the size of a small dishwasher."

The equipment vaporizes highly concentrated hydrogen peroxide to decontaminate masks in line with guidelines from the U.S. Centers for Disease Control and Prevention for reuse up to 20 times. 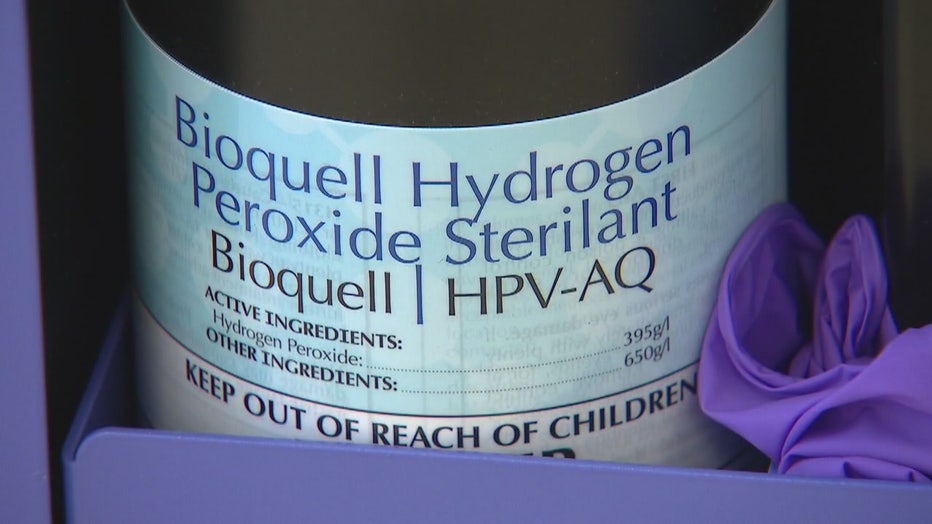 The equipment can accommodate 10,000 masks per cycle and the department plans to run multiple decontamination cycles each day, the sheriff said.

"The market rate for these N95 masks keeps climbing day by day," Villanueva said, adding that his department has about a nine-day supply available at any one time. 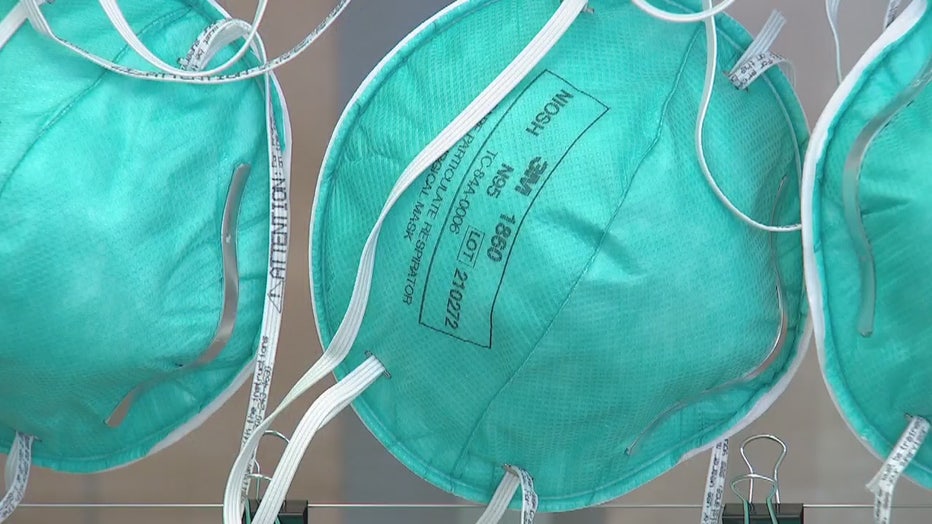 The optimal situation would be to buy new masks, but the county's use of them "can rapidly escalate into a critical shortage" and "vaporized hydrogen peroxide has been proven to be among the most effective" ways to decontaminate used masks, Ghaly told reporters.

Osby said his department has been working with local, state, and federal officials, as well as vendors around the world to get the masks his department needs and thanked the sheriff for his help.

For now, the plan is to decontaminate and recycle masks for use by county departments, but Ghaly said other agencies were considering similar efforts and a sheriff's spokesman said the department would consider aiding another county "partners" in the future.

The sheriff's Scientific Services Bureau will oversee the process to ensure strict adherence to CDC guidelines.

"We cannot have our doctors, our nurses on the front line of our hospitals, our firefighters, our deputies getting positive because that means they are no longer able to serve the community and that imperils everyone's safety," the sheriff said.

The total savings will depend on how rapidly the price of masks escalates. Villanueva presented a chart showing that at a price of $3.75 per N95 mask, the department would save nearly $18 million by recycling 250,000 masks 20 times rather than buying 5 million masks for one-time use. 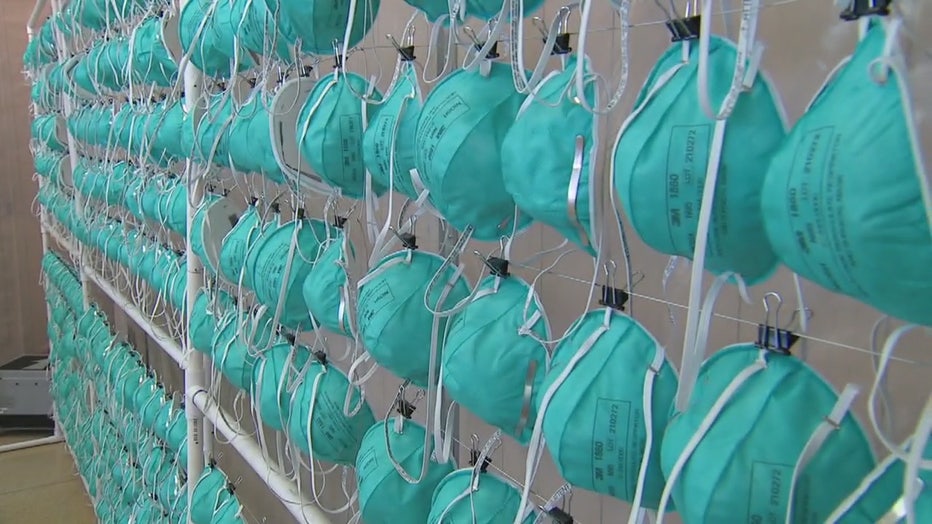 The projected savings come in the context of a budget deficit for the Sheriff's Department that led the Los Angeles County Board of Supervisors to freeze $143 million in funding last October.

Last week, Villanueva warned that critical services were at risk because of the freeze.

Supervisors Sheila Kuehl and Hilda Solis have since proposed releasing roughly 60% of that money, a motion set to be voted on Tuesday.

In urging the board to unfreeze funds, the sheriff had argued that he was bringing down overtime and cutting costs.

Kuehl said that despite a projected $20-30 million in savings and new revenue,

Villanueva's department is still expected to end the June 30 fiscal year with an $89 million deficit.

"No county department can be permitted to accrue significant deficits year after year," Kuehl said last week. "It's not fair to taxpayers, and it's detrimental to the overall county budget since the overrun reduces funding to the budgets of other essential departments."

During his briefing, Villanueva said he's burdened by a structural deficit, and that the county underfunds law enforcement needs.

"The cost of running the sheriff's department is $3.9 billion and they give me $3.5 billion and say good luck with the rest of it," Villanueva told reporters.

He also suggested that the county, along with other local, state, and federal officials, need to rethink their spending priorities, potentially focusing more dollars on services with life-and-death consequences.

"There are certain county departments that provide life and safety to the community," the sheriff said. "I guess those are what you'd call tier one."

The County Fire Department -- another of the departments the sheriff considers "tier one" -- was struggling to replace old equipment and increase staffing levels even before the first coronavirus case was identified in the U.S. Voters turned down a proposal to provide more funding for firefighters and paramedics through a parcel tax.

Asked whether he thought elected officials should take a pay cut in the face of the pandemic, the sheriff suggested that he might.

"If I have to step up to the plate and reduce my salary, well as a leader we have to set the example for every single county employee," Villanueva said.

"I would expect that I would be joined by the Board of Supervisors in doing exactly that if it comes to that."

Villanueva is paid a salary of $339,509, while each of the county supervisors receives a salary of $213,833, commensurate with that of a Superior Court judge, according to board documents.

County CEO Sachi Hamai released a $35.5 billion proposed budget Monday, but said in a statement that the spending plan was "expected to undergo extensive changes in the months ahead as revenues decline and costs rise due to the COVID-19 emergency." 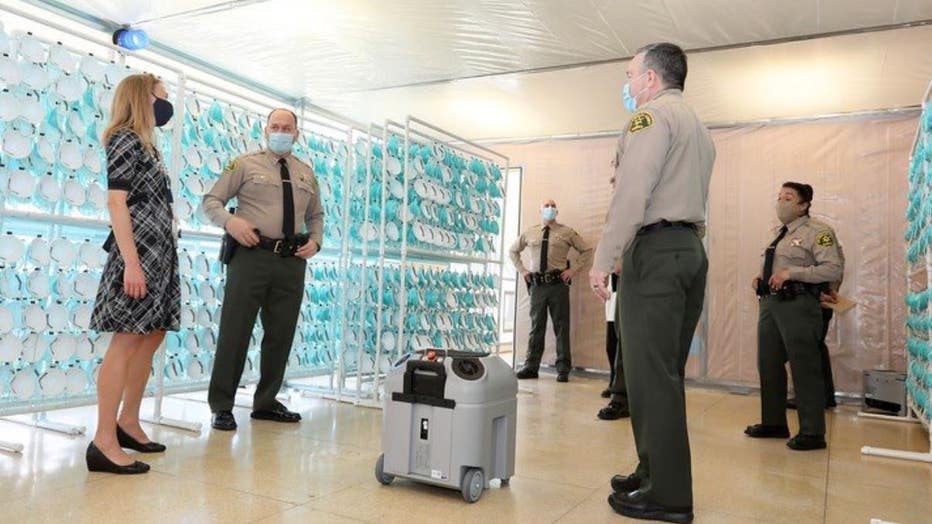 During the sheriff's briefing, he also updated reporters on COVID-19 cases in the jails and his department.

Sixty-one employees, both deputies, and non-sworn personnel have tested positive for the coronavirus.

Another 250 are quarantined and 754 are back on the job after suffering symptoms or being quarantined.

"That number is staying flat, it hasn't grown in the last few days, so that's a positive," Villanueva said.

In the jails -- where the population has been reduced by the release of roughly 5,000 inmates on pretrial hold or convicted of lesser offenses -- a total of 2,563 inmates are in quarantine, 71 are isolated and 123 have tested positive for the virus, according to the sheriff.