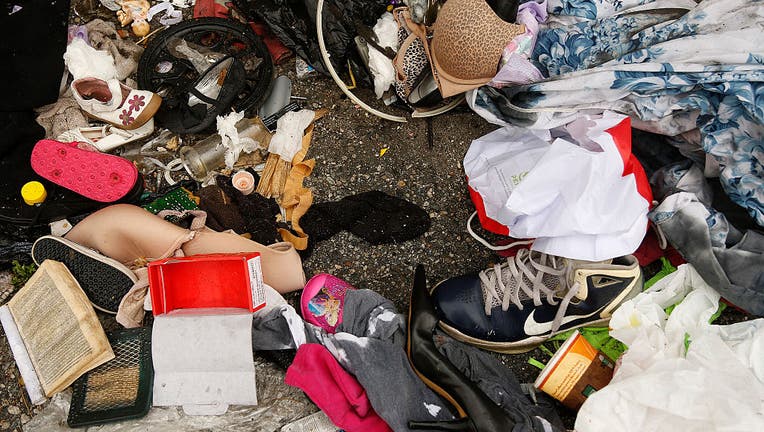 LOS ANGELES, CA - APRIL 8: Illegal dumping is a problem in many areas of Los Angeles, including here along Azuza St. at S. Mission Rd. LA Sanitation is unveiling new tech aimed at cleaning up the streets of Los Angeles. (Photo by Rick Loomis/Los Ange

LOS ANGELES - As part of a plan to address illegal street dumping across Los Angeles, the City Council took steps Wednesday to have the Bureau of Sanitation double the number of staff that responds to calls about the issue.

The council's motion, which passed 14-0, instructs the Bureau of Sanitation to expedite a plan to address illegal dumping, including through the hiring of 61 positions, with some new hires being added to the teams that keep city sidewalks and public areas clean, sanitary, safe and accessible by removing abandoned waste.

The plan will be considered during budget talks in coming weeks for fiscal year 2022-23, which will need to allocate $4.46 million for salaries and expenses and $10.7 million for a fleet of 25 collection vehicles to expand the bulky item pickup program.

Councilman Kevin de León -- who is on the Budget and Finance Committee and was one of the leaders of the effort -- said that the council's approval of the plan Wednesday signifies that it will be included in the budget.

The Bureau of Sanitation currently has nine two-person teams that deploy each day to handle illegal dumping cleanup, according to the bureau. The Office of Community Beautification also provides funding to address loose trash and debris, and council district offices fund their own crews to address it as well.

"Last year the bureau responded to nearly 30,000 service requests and collected over 15,000 tons of solid waste. Illegal dumping is not only a blight, it has a negative effect on the way we see our own city, the way we feel about our surroundings and moreover, it's just plain unhealthy and dangerous, " Councilman Paul Koretz said. "So if we're really going to tackle this issue, we need to be providing the bureau with the resources needed to do that, and that includes education and enforcement to deter illegal dumping."

De León said Wednesday that when he heard the amount of teams that the Bureau of Sanitation has to address illegal dumping, he thought the number was for his district alone.

"This is the largest, geographically, city in all of America, with the second-largest city population after New York ... and we have nine two-person team," de León said after the vote Wednesday." It doesn't take rocket science. We have to double down."

With the 61 new hires expected in the 2022-23 fiscal year, the teams will be doubled to 18 two-person teams, de León said. The new hires will also allow the city to expand its Comprehensive Cleaning and Rapid Engagement (CARE/CARE+) program at encampments.

The motion also reconvenes the interdepartmental Illegal Dumping Working Group, which will consider creating a camera program -- including through "dummy cameras"--  to address dumping and levying fines and other penalties that sufficiently deter violations.

The plan also calls for a detailed multilingual and multi-platform education campaign about illegal dumping, particularly to tell Angelenos that they can call 3-1-1 to have bulky items picked up.

Wednesday's vote comes more than a year after Controller Ron Galperin released a report that found illegal dumping of trash and hazardous items in the city's public areas increased 450% between 2016 and 2020. Galperin said the Bureau of Sanitation is struggling to keep up with the increasing amount of waste dumped on sidewalks, streets and alleys, and the waste is making it unsafe for all Angelenos.

The report also said that the Bureau of Sanitation's resources are spread too thin because it is charged with handling illegal dumping and cleanups of homeless encampments, and as a result the average time it took sanitation crews to respond to illegal dumping requests in 2020 was five days.

The bureau has 19 surveillance cameras across the 470-square-mile city to catch illegal street dumping incidents.

Koretz on Wednesday thanked Galperin for "shedding much-needed light on the issue of illegal dumping."