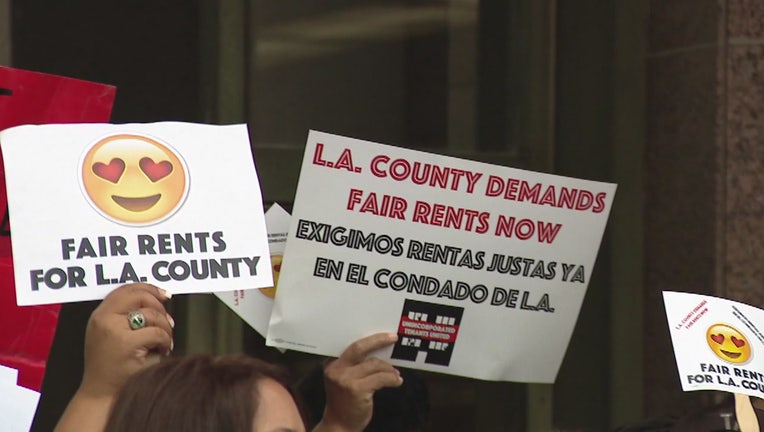 LOS ANGELES - The Board of Supervisors unanimously voted to move forward on a permanent rent control ordinance for unincorporated areas of Los Angeles County.

LA County will move ahead with rent control ordinance

Tenants in unincorporated areas of LA County may be looking at some rent relief soon.

Supervisor Kathryn Barger, who had consistently opposed rental controls in favor of easing development-related regulations, voted in agreement with her colleagues.

"I feel as though a compromise has been made," she said. "When I hear the stories about landlords increasing (rents) by over 100% ... I think that it's an unfair shift to individuals that may be vulnerable."

Supervisor Sheila Kuehl, who championed the proposed ordinance, said she believed it would alleviate homelessness.

"Economic issues are the number one reason people become homeless," Kuehl said. "Many people are faced with astronomical rent increases and can't afford lawyers to fight them."

Kuehl said she hoped the county's move would spur more cities to step up with regulations of their own.

A statewide rent stabilization bill is also pending. The legislation was passed by the state Senate as the county board was meeting and has until Friday to garner Assembly approval.

Some opponents of the county measure urged the board to wait to see  what happens in Sacramento, arguing that a local ordinance would be redundant or confusing.

Kuehl countered, "Don't think that state law is a slam-dunk to pass" and warned that "swarms" of lobbyists are working in opposition to Assembly Bill 1482.

Gov. Gavin Newsom was more optimistic as he praised the Senate for voting in favor of the Tenant Protection Act of 2019.

"California is at the doorstep of enacting strong, statewide renter protections -- safeguards that are critical to combating our state's housing and cost-of-living crisis," Newsom said in a statement.

The proposed county ordinance would go further in limiting rents than the statewide proposal, which calls for a cap of 5% more than the Consumer Price Index, a measure of inflation.

A draft of the county ordinance is still in process, but Kuehl's motion anticipates a sliding cap based on the value of the CPI with a maximum increase of 8%. The CPI for Los Angeles is currently 3.3%. If the ordinance was in effect today, rent increases would be limited to that percentage.

Department of Consumer and Business Affairs Director Joe Nicchitta said the new regulation would "represent an extraordinary expansion of the safety net."

Supervisor Hilda Solis, who co-authored the rent control motion, said about 100,000 people would be affected by the ordinance, which would cover only the unincorporated areas of the county.

Supervisor Mark Ridley-Thomas said it was a matter of fairness.

"We must help very low-income renters who are at risk of losing their housing," he said. "Am I interested in a full-on attack against landlords? That isn't my objective. I simply want justice to be done."

Before the board meeting, dozens of rent control advocates assembled on the steps outside the Kenneth Hahn of Administration, joining Kuehl and mayors from Inglewood and Culver City in calling for rent control as a way to address inequities.

Standing in front of activists holding signs with messages like "Tenant Needs Over Corporate Greed," Inglewood Mayor James T. Butts Jr. said his city has the lowest average rents in the South Bay.

However, as a new NFL stadium has driven investment in the city, Butts said some landlords have pushed to raise rents as much as 75%. In response, Inglewood has imposed a 5% cap on annual increases and Butts said city officials plan to drop that to 3%.

But the mayor said he understands that long-term residents who own their homes want to reap the benefits of the city's changing economics.

"We have great empathy for our landlords who have waited patiently," Butts said. "We believe that landlords should receive a fair rate on their properties."

The problem, according to the mayor, is outside investors with no community ties who have bought properties in bulk and hope to evict tenants to push rates up. If left unchecked, that trend will mean that local worker programs related to the stadium will end up benefiting newcomers rather than longtime residents, Butts said.

At the start of the board discussion, Barger, quizzed Nicchitta about the ordinance and expressed skepticism.

"I believe that rent control is going to exacerbate the fact that there aren't enough apartments out there," Barger said, calling for a more targeted strategy to help high-risk populations, such as seniors.

But Barger seemed to be swayed by what she heard during public comment.

Opponents of rent control remained unconvinced, pointing to the failure of existing regulations to solve the city of Los Angeles' housing supply and affordability problem.

"Rent control is not going to work," David Kissinger of the South Bay Association of Realtors told the board, noting the thousands of people sleeping on the street in rent-controlled Los Angeles. "Rent control is the wrong answer to the right question."

"Rent control will not solve our housing problem," Elizabeth de Carteret of the Southland Regional Association of Realtors said, warning the board against punishing "mom-and-pop" owners. "We need more housing, not more regulation."

Even those who support rent control as a way to protect tenants say landlords can dodge constraints by converting units to condos to take advantage of exemptions or sell to owner-users, ultimately decreasing the supply of rental housing.

Others questioned the wisdom of capping rents in unincorporated areas while rents rise unrestrained in neighboring jurisdictions.

The ordinance is expected to allow higher rents for luxury units of two bedrooms or less, require landlords to register rental units, and prohibit evictions without cause, among other provisions. It also aims to allow landlords to recoup the cost of major capital repairs but prohibits them from doing so through a permanent rent increase.

The board also asked staffers to explore whether the county can force landlords to offer relocation assistance to tenants priced out of rental units not covered by the rent stabilization ordinance.

Landlords in unincorporated areas are currently subject to a 3% annual limit on rent increases under a temporary moratorium imposed by the board last December.