Search continues for kidnapped family out of Merced

Police in Merced are continue looking for four family members who were kidnapped at gunpoint. The lead suspect in the case is currently in the hospital.

MERCED COUNTY, Calif. - A man suspected of kidnapping a Sikh family, including an 8-month-old baby, in Merced tried to kill himself Tuesday and is hospitalized in critical condition, authorities said. The family is still missing.

The Merced County Sheriff’s Office said in a statement that investigators identified Jesus Salgado, 48, after he used a victims’ ATM card. The family was kidnapped Monday at gunpoint from a business in Merced, the office said.

Family members said the family, which has a trucking company, was taken from an office that they had only opened about a week earlier. The sheriff said detectives believe the kidnapper destroyed unspecified evidence in an attempt to cover his tracks.

The statewide search continues for a missing California family of four who was kidnapped at gunpoint in Merced.

Eight-month-old Aroohi Dheri and her parents – 27-year-old Jasleen Kaur and 36-year-old Jasdeep Singh – remain missing. The baby's uncle, 39-year-old Amandeep Singh, is also still missing and is believed to be with the kidnapped family.

At this time authorities believe at least one other person is involved. Authorities said the kidnapper has yet to make any ransom demands or contact of any kind.

As of Wednesday morning, authorities said Salgado was still sedated in a medical facility and they have not yet questioned him but hope to do so today.

Salgado, who is believed to be a resident of Madera County, has a prior criminal history and convicted of robbery in 2005, the sheriff's office said. He was paroled in 2015 and since that time authorities have had no major contact with him.

The sheriff's office said due to Salgado's prior history with robbery convictions, "it was his motivation back then and could be the same now." 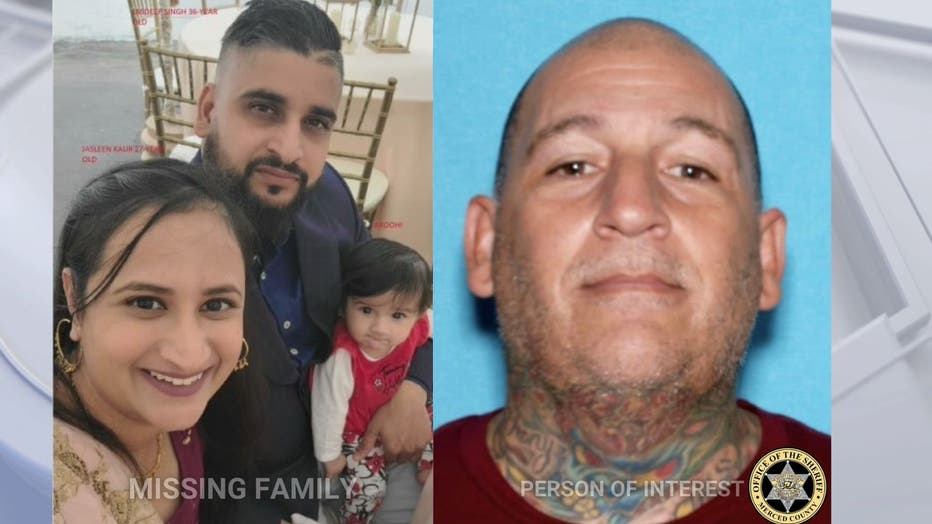 The sheriff’s office said in a statement Tuesday that firefighters on Monday found a pickup truck belonging to Amandeep Singh that was on fire. Merced Police Department officers went to Amandeep Singh’s home where a family member tried to reach him and the couple. When they were not able to reach their family members, they called the Merced County Sheriff’s Office to report them missing, the office said
Merced is a city of 86,000 people about 125 miles southeast of San Francisco in the San Joaquin Valley.

Anyone with information on the missing family or Salgado is asked to call 209-385-7445.