PHOENIX - A judge has thrown out Republican Kari Lake’s challenge of her defeat in the Arizona governor’s race to Democrat Katie Hobbs, rejecting her claim that problems with ballot printers at some polling places on Election Day were the result of intentional misconduct.

In a decision Saturday, Maricopa County Superior Court Judge Peter Thompson, who was appointed by then-Republican Gov. Jan Brewer, found that the court did not find clear and convincing evidence of the widespread misconduct that Lake had alleged had affected the result of the 2022 general election.

Lake, who lost to Hobbs by just over 17,000 votes, was among the most vocal 2022 Republicans promoting former President Donald Trump’s election lies, which she made the centerpiece of her campaign. While most of the other election deniers around the country conceded after losing their races in November, Lake has not. Instead, she asked the judge to either declare her the winner or order a revote in Maricopa County.

Lawyers for Lake focused on problems with ballot printers at some polling places in Maricopa County, home to more than 60% of Arizona’s voters. The defective printers produced ballots that were too light to be read by the on-site tabulators at polling places. Lines backed up in some areas amid the confusion.

Kari Lake's team will have until 5 p.m. on Dec. 26 to file a response, and any motion for sanctions will need to be submitted by 8 a.m. that morning.

County officials say everyone had a chance to vote and all ballots were counted, since ballots affected by the printers were taken to more sophisticated counters at the elections department headquarters. They are in the process of investigating the root cause of the printer problems.

Lake’s attorneys also claimed the chain of custody for ballots was broken at an off-site facility, where a contractor scans mail ballots to prepare them for processing. They claim workers at the facility put their own mail ballots into the pile, rather than sending their ballots through normal channels, and also that paperwork documenting the transfer of ballots was missing. The county disputes the claim.

Lake faced extremely long odds in her challenge, needing to prove not only that misconduct occurred, but also that it was intended to deny her victory and did in fact result in the wrong woman being declared the winner.

Her attorneys pointed to a witness who examined ballots on behalf of her campaign and discovered 14 ballots that had 19-inch images of the ballot printed on 20-inch paper, meaning the ballots wouldn’t be read by a tabulator. The witness insisted someone changed those printer configurations, a claim disputed by elections officials.

County officials say the ballot images were slightly smaller as a result of a shrink-to-fit feature being selected on a printer by a tech employee who was looking for solutions to Election Day issues. They say about 1,200 ballots were affected by turning on the feature and that those ballots were duplicated so that they could be read by a tabulator. Ultimately, these ballots were counted, officials said.

In her lawsuit, Lake claims tens of thousands of voters were disenfranchised on Election Day, and cost her the election. FOX 10's Irene Snyder reports.

A person who takes public-opinion polls testified on behalf of Lake, claiming technical problems at polling places had disenfranchised enough voters that it would have changed the outcome of the race in Lake’s favor. But an expert who was called to testify by election officials said there was no evidence to back up the pollster’s claim that 25,000 to 40,000 people who would normally have voted actually didn’t cast ballots as a result of Election Day problems.

Thompson had previously dismissed eight of the 10 claims Lake raised in her lawsuit. Among those were Lake’s allegation that Hobbs, in her capacity as secretary of state, and Maricopa County Recorder Stephen Richer engaged in censorship by flagging social media posts with election misinformation for possible removal by Twitter. He also dismissed her claims of discrimination against Republicans and that mail-in voting procedures are illegal.

Her campaign released the following statement:

"Last month, Arizonans made their voices heard at the ballot box. They chose sanity over chaos, and commonsense, bipartisan results over division. The voters of Arizona – not the conspiracy-riddled, dark corners of the Internet – are the ones who choose our leaders. We’re pleased that the courts have upheld the will of the voters, and Governor-Elect Hobbs is continuing the work of preparing to take office as Arizona’s next governor."

Earlier on Friday, another judge dismissed Republican Abraham Hamadeh’s challenge of results in his race against Democrat Kris Mayes for Arizona attorney general. The court concluded that Hamadeh, who finished 511 votes behind Mayes and hasn’t conceded the race, didn’t prove the errors in vote counting that he had alleged.

A court hearing is scheduled Thursday to present results of recounts in the races for attorney general, state superintendent and for a state legislative seat.

Lawyers for Republican gubernatorial candidate Kari Lake were back in court on Dec. 22 after her campaign filed a lawsuit challenging the results of the midterm election.

Lake's team called the director of the Big Data Poll Richard Baris to the witness stand, who claims between 25 and 40,000 voters were disenfranchised on Election Day because of issues at polling locations.

Baris said 813 people across Arizona were polled, and people who said they planned on voting never completed an exit interview.

Witness for the defense included a Political Science professor, Dr. Kenneth Mayer. Dr. Mayer criticized Baris’ assumption, and says after analyzing the data, he found no evidence any voter was prevented from voting.

"He is making the assumption that every one of those people who didn’t respond to his poll tried to vote, or didn’t vote because they were disenfranchised. He is essentially taking the non-response rate," said Dr. Mayer.

Election officials also took the stand, acknowledging there were issues with the printers on Election Day, adding that three locations also had "shrink to fit" issues, meaning that the printing on the 20-inch ballots were too small, and therefore rejected.

Election officials say all affected voters had the option of placing their ballots in what was labeled ‘Box 3.' They were then tabulated by a bipartisan panel. They say no one was prevented from voting.

Dec. 21 was Day 1 of a two-day trial brought on by Lake, the Republican Party candidate for Arizona Governor. She was defeated by Democrat Katie Hobbs in the November election, but Lake has made various claims over alleged improprieties in the election. FOX 10's Steve Nielsen reports.

Day one of the two-day election trial in Maricopa County was held on Dec. 21.

After a judge dismissed eight of Kari Lake's counts, her team had to prove there were intentional chain of custody issues and intentional printer issues that impacted the outcome of the election.

Lake's team brought up an expert that said he has proof ballots were intentionally printed incorrectly, but the county responded, saying every vote was still counted.

Lake did not talk outside of court, but inside, her team claimed a printing issue on Election Day was intentional and disenfranchised voters.

During a ballot inspection on Dec. 20 of 15 ballots, Parikh claimed he saw proof the ballots were actually 19-inch documents printed on 20-inch paper.

When asked how many of those contained 19-inch ballot image on 20-inch paper, Parikh replied, "14."

"That ballot does not exist. The only ballot that exists is a 20-inch ballot."

Parikh says it happened and it was deliberate.

When asked is there any way, in his opinion, for a 19-inch ballot to be projected on a 20-inch ballot by accident, Parikh said, "No, sir." Then he was asked, "Why not?"

"Because the settings and the configurations and the procedures that are used cannot allow that," replied Parikh.

Jarrett responded, "Again, you're asking me to speculate about things that I have no knowledge of occurring. So I don't know if it could have been a deliberate act or not. I don't believe that that occurred."

Whether it was deliberate matters, but they need more.

In this trial, Lake's team must prove someone interfered in the election purposely and succeeded in changing the vote.

During the cross, county attorneys pointed out even if the ballots were 19-inches, deliberate or not, every vote was still counted.

There were multiple hiccups for Lake's team. They attempted to call a witness, but never added him to the witness list, so he could not be called. Exhibits were listed, but never attached.

While eight of the 10 counts in her election lawsuit were dismissed, a judge did allow defeated Republican gubernatorial candidate Kari Lake's legal team to prove their claims, in court, on ballot printer and ballot chain of custody problems. FOX 10's Steve Nielsen has more on what Lake's legal team needs to prove. 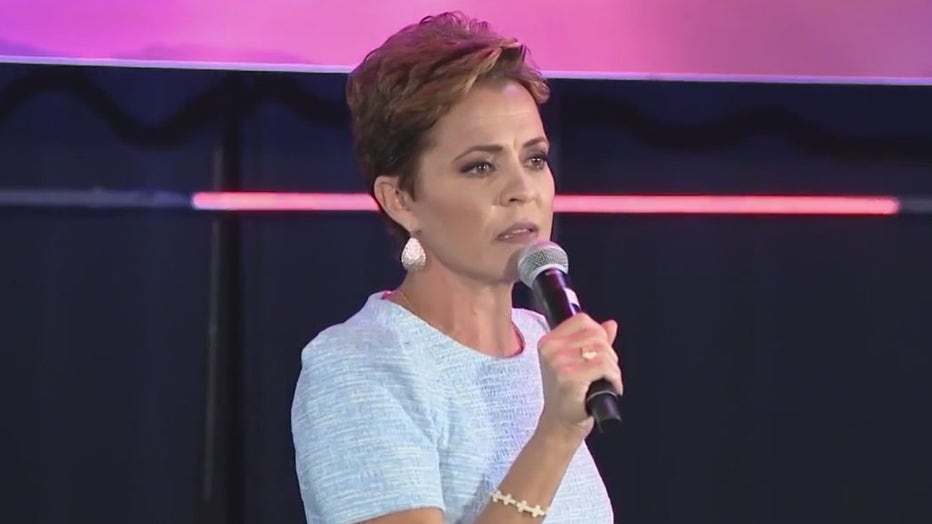