FOX 29's Jeff Cole has the latest from Wilmington.

SCRANTON, Pa. - Democratic presidential nominee Joe Biden spent Election Day campaigning in his hometown of Scranton. He also made a stop in Philadelphia before heading back to Wilmington where he is expected to speak Tuesday night.

In Scranton, Biden arrived at the small, white two-story house to a hero’s welcome of more than 100 people cheering across the street. Biden greeted the crowd and said, “It’s good to be home!” 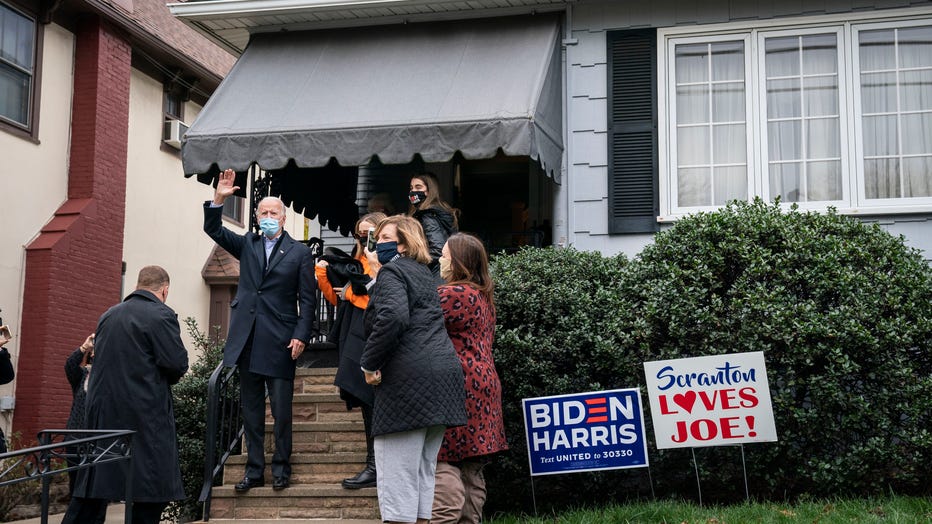 Democratic presidential nominee Joe Biden waves to onlookers from the steps of his childhood home on November 03, 2020 in Scranton, Pennsylvania. As polls open on Election Day, nearly 100 million Americans have already cast their ballots through earl ((Photo by Drew Angerer/Getty Images))

Biden lived in the home until he was 10 years old. On Tuesday, he walked up the front steps and chatted with the current owners before going in with his granddaughters. When Biden came out, he said the current residents had him sign their wall. He wrote:

Biden then walked across the street to greet the crush of supporters, who cheered his name and applauded.

Biden flew to Philadelphia Tuesday afternoon where he was greeted by a cheering crowd outside of Relish in West Oak Lane.

Joe Biden to address nation from Wilmington on Election Night

FOX 29's Jeff Cole has the latest on where Joe Biden has been during Election Day, and his plans to address the nation Tuesday night.

Biden is expected to address the nation in Wilmington, Delaware Tuesday night where he will be joined by Democratic vice presidential nominee Kamala Harris.