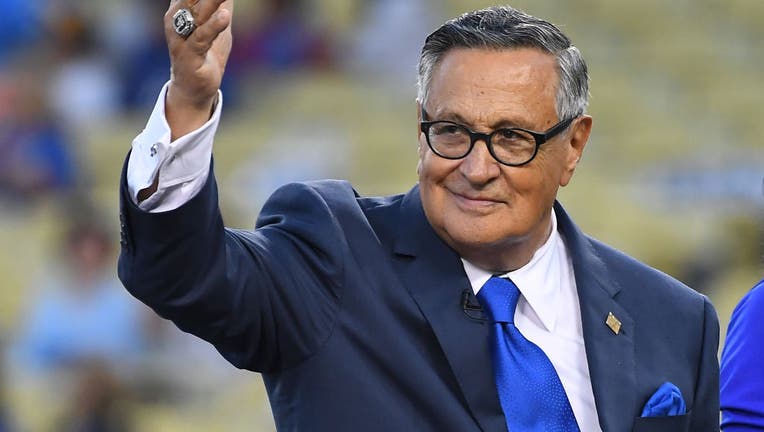 Longtime Los Angeles Dodgers broadcaster Jaime Jarrin acknowledges the crowd after being inducted into the Dodger Stadium Ring of Honor the game against the San Diego Paders at Dodger Stadium on September 2, 2018 in Los Angeles, California. (Photo by

LOS ANGELES - Dodgers Hall of Fame broadcaster Jaime Jarrín has announced that he will retire following the 2022 season, which will be his 64th season with the organization, the Dodgers announced Tuesday.

"I'm grateful to the Dodgers – the best organization in baseball - for giving me the opportunity to do what I love most for 64 years. As much as I'll miss my ‘baseball family’ at Dodger Stadium and across the country, I'm looking forward to spending more time with my sons Jorge and Mauricio and my grandchildren and nurturing my love of travel," Jarrín said in the announcement.

The Spanish voice of the Dodgers is retiring after the 2022 MLB season.

The elder Jarrín began calling Dodgers games in 1959 and was inducted into the Hall of Fame in 1998, becoming just the second Spanish-language announcer to receive the honor.

"Jaime was integral in introducing the Dodgers to Los Angeles and in giving a voice to the franchise’s Latino stars," team president and CEO Stan Kasten said. "We’re going to cherish this last year with him on the broadcast and wish him the best in retirement."

Plans to honor Jarrín during the 2022 season will be announced later.