The Georgia woman's daughter, sister, nephew, four grandkids, and 76-year-old mother had to jump from their apartment on one of the high floors to escape the fire.

LITHONIA, Ga. - Eighteen people are recovering after a massive fire ripped through an apartment complex.

The fire happened Friday near the corner of Fairington Village Drive off Fairington Parkway in Lithonia.

Investigators are still searching for the cause of the fire.

Deborah Nelson’s daughter, sister, nephew, four grandkids, and 76-year-old mother had to jump from their apartment on one of the high floors to escape the fire Friday.

“My nephew said by the time they got to my mother the ceiling was caving in and hit him on his back. He only had about a second or two to get out the window,” Nelson said.

Officials confirmed 18 people were injured and of those 17 were taken to the hospital for treatment. 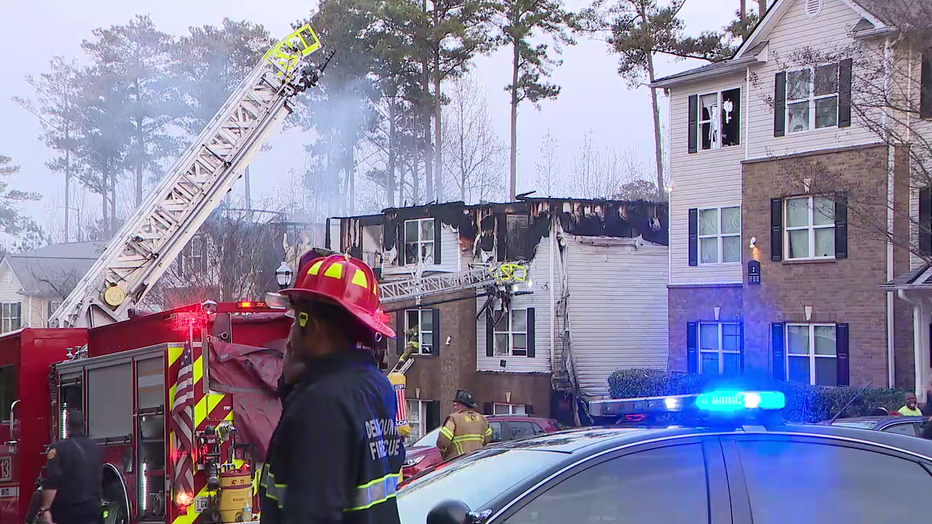 Her mom and several grandkids have broken bones. Her sister and daughter broke their backs.

“When you look at the pictures or video you can see the top part of the building. That whole top part was their apartment," she said. "I can see my mom's room and my sister's room. The whole roof was gone and everything was totally burned.”

The Red Cross is stepping in to help the 30 people displaced in the fire. The family has started a GoFundMe to help replace everything destroyed, including computers needed for school and gifts for Christmas.

“Take nothing for granted. No day is promised,” Nelson said.

Nelson believes the fire was intentionally set in retaliation to a drug problem she says is rampant in the community.

Fire investigators wouldn’t comment on how the fire started or if they suspect arson.