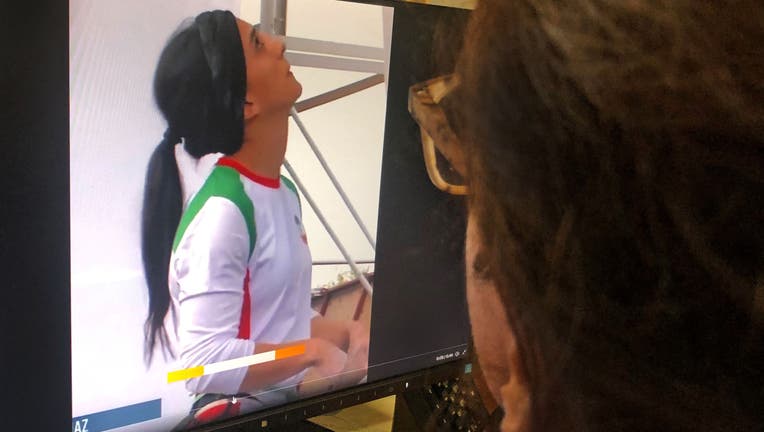 Iranian climber Elnaz Rekabi competes without a hijab, in the Cypriot capital Nicosia on October 18, 2022. (Photo by AFP) (Photo by -/AFP via Getty Images) (Getty Images)

Iranian competitive climber Elnaz Rekabi was placed on house arrest in Iran Friday after she competed without wearing a hijab in South Korea.

Rekabi returned to Tehran this week from the International Federation of Sport Climbing’s Asia Championship in South Korea where she refused to done a hijab which is required of female athletes by the Islamic Republic.

She was met with cheers from admirers who greeted her at the airport.

The 33-year-old’s phone was confiscated after arriving in her hometown of Zanjan in northwest Iran, Persian news outlet Iran International reported Friday.

Vafa said the athlete’s actions were "unintentional" despite coinciding with nationwide protests over the death of 22-year-old Mahsa Amini who was beaten and killed for wearing her hijab too loosely.

"It’s a small issue. I’m surprised that it is being talked about so much," Vafa said. "In our view, it was not a big issue."

Upon returning to Iran Reakabi was said to have been hosted as "a guest at Iran’s Olympic committee hotel for one day, along with her family," according to Vafa.

But it remains unclear whether Rekabi had a choice in staying at the hotel and images later surfaced showing her donning the same black baseball cap and hoodie that she wore after her flight during a meeting hours later.

Iranian news outlets also reported Thursday that her brother had been arrested by the Iranian Revolutionary Guard following a complaint that had been issued by Vafa as the head of the Iranian Olympic Committee.

Lisa Daftari the editor-in-chief of the Foreign Desk told Fox News Digital that: "The Islamic Republic is set on making an example out of this act of courage. They want the rest of the Iranian population to know the serious punishments for protesting or disrespecting the tenants of their theocracy. For the last five weeks, brave Iranian women and men have displayed acts of courage to demonstrate their disenchantment with this government," she said.

Daftari continued: "This young woman used her platform as a well-known athlete on the global stage to be a representative of Iranian women fighting for their freedom. And now, we still don’t know what her or her brother’s fate will be."

Tehran continues to face nationwide protests and opposition at home relating to its human rights abuses with a particular focus on its strict restrictions on women’s rights.