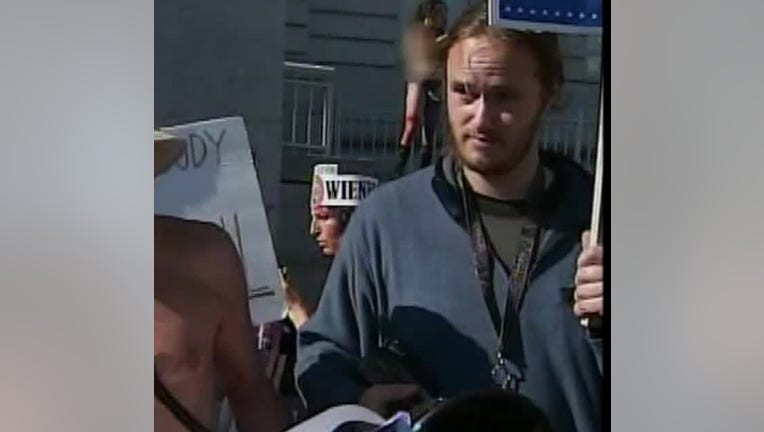 David DePape at a demonstration San Francisco that was held by nudists upset about restrictions.

SAN FRANCISCO - The man charged with attempted murder in connection with a violent hammer attack against House Speaker Nancy Pelosi’s husband, Paul Pelosi, is in the United States illegally and could be deported to Canada, federal agents said Thursday.

Immigration and Customs Enforcement agents said DePape entered the United States as a temporary visitor in March 2008 at the San Ysidro port of entry. Canadians who enter as temporary visitors generally do not require a visa, officials said.

The status DePape used to enter the U.S. allows Canadians to stay for six months. The LA Times reported that DePape moved from Canada to California about 20 years ago.

The detainer, issued on Tuesday, asks San Francisco law enforcement to notify ICE before he is released in order for the federal agency to take custody of him, according to the Department of Homeland Security.

However, the immigration detainer was sent to the San Francisco County Jail, where officials have historically not cooperated with ICE, because of sanctuary city laws. If someone is convicted of a violent felony, however, the sanctuary status can be waived.

On Thursday, the San Francisco Sheriff's Office wouldn't say either way. In a statement, a spokesman said that each ICE detainer is reviewed on a case-by-case basis.

However, if convicted, DePape likely won't serve his sentence in San Francisco.

If the 42-year-old DePape is convicted of the multiple felony charges in last week's break-in and bludgeoning, he would most likely be sent to the California Department of Corrections and Rehabilitation. He also faces federal charges.

In addition to attempted murder, the San Francisco District Attorney charged DePape with residential burglary, assault with a deadly weapon, elder abuse, false imprisonment of an elder and threats to a public official and their family. He faces 13 years to life in state prison if convicted of all local charges.

The U.S. Attorney's Office charged him with assault and attempted kidnapping. If convicted, each count carries a maximum sentence of 30 and 20 years, respectively

State and federal prisons are not bound by sanctuary laws and historically, those prison systems have cooperated with ICE.

DePape so far has pleaded not guilty to smashing the back door of the Pelosis' Pacific Heights home and fracturing Paul Pelosi's skull while the House Speaker was in Washington, D.C. He has not yet been arraigned in federal court.

DePape told police that he felt Nancy Pelosi was the "leader of the pack" in terms of the Democratic Party and he had intended to break her kneecaps had she been home, court documents indicate.

For now, DePape remains in San Francisco jail without bail.

Deportations normally occur after criminal cases are resolved and defendants serve their sentences, which means if DePape is convicted of all counts in both the state and federal systems, his detainer – if honored – would take years, possibly decades.