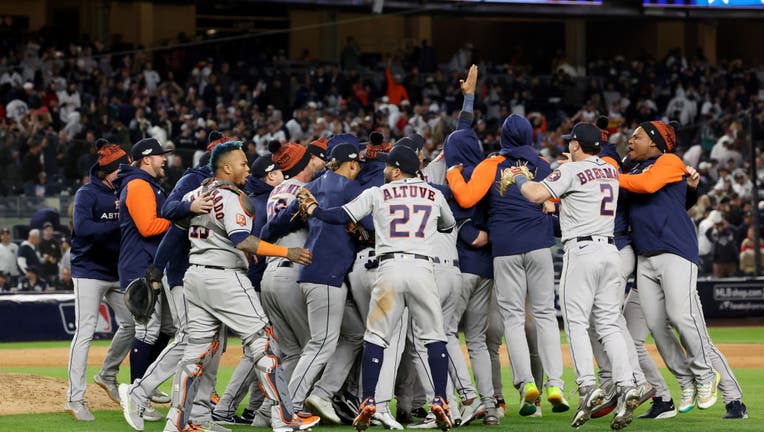 NEW YORK, NY - OCTOBER 23: Members of the Houston Astros celebrates with teammates on the field after Astros defeated the New York Yankees in Game 4 of the ALCS at Yankee Stadium on Sunday, October 23, 2022 in New York, New York. (Photo by Mary DeCic

HOUSTON - As the Houston Astros face the Philadelphia Phillies on Friday evening, they’re looking to do something they’ve never done before – win the first game of a World Series.

The Astros so far have swept through the postseason, defeating the Seattle Mariners in the American League Division Series and the New York Yankees in the AL Championship Series.

MORE: World Series 2022: Everything you need to know about the Fall Classic between the Phillies and Astros

This is the Astros’ fourth World Series in six years, and their fifth in franchise history.

In each of their World Series runs, the Astros have never won the first game of the best-of-seven series. Despite a Game 1 loss, the team has, in the past, come back to win the series once before. Their lone World Series victory came in 2017.

Here’s a look back at the Astros' world series history.

They are calling this the biggest World Series mismatch in more than a century. Here's a closer look at the teams.

In 2005, the Astros faced the Chicago White Sox. The White Sox beat the Astros in four games.

In 2017, the Astros defeated the Los Angeles Dodgers in seven games. The Astros won the second, third, fifth and seventh games.

In 2019, the Astros beat the Washington Nationals in the third, fourth, and fifth games, before the Nationals ultimately won the series in Game 7.

Last year, the Astros faced the Atlanta Braves in the World Series. The Astros won two games – the second and fifth – before the Braves won the series in Game 6.