A remembrance service was held Saturday night to honor the life of 20-year-old Lance Cpl. Kareem Grant Nikoui. The Norco native died during a suicide bombing at the Kabul Airport along with 12 other US servicemembers.

NORCO, Calif. - Hundreds of people gathered at the George Ingalls Equestrian Center in Norco to honor the life of a Marine killed during a suicide bombing at the Kabul airport.

Lance Cpl. Kareem Grant Nikoui and 12 other US service members died on August 26 when a suicide bomb went off at the Kabul airport. The attack happened as people were being evacuated amid the Taliban takeover. The blast killed 169 Afghans and 13 U.S. service members, including 11 Marines.

The community of Norco held a remembrance service Saturday night for 20-year-old Kareem Nikoui.
Many who attended have a personal connection with Nikoui. 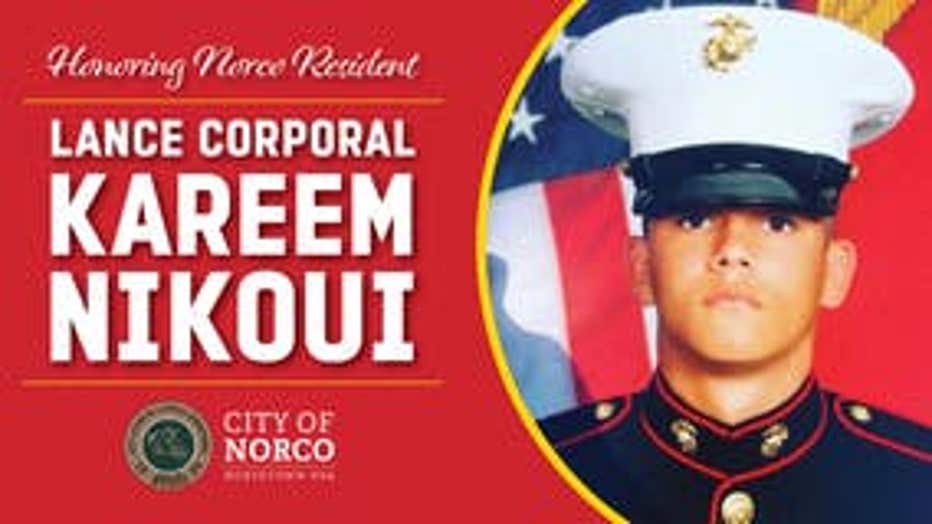 "We live in the same neighborhood and go to the same church," said one attendee.

"Our kids grew up with Kareem and went to ROTC with him. We came out to support Kareem’s family," said another attendee.

They say Nikoui always wanted to be a Marine, even while still in high school. He graduated from Norco High School in 2019 and served in JROTC.

People in Norco say it was shocking for them to hear of a local Marine killed overseas.

The memorial service was held at George Ingalls Equestrian Center… the same arena where Nikoui was sworn in as a Marine. In fact, his cousin built the veteran’s memorial in Norco. Nikoui's name will soon be enshrined on the 'Lest We Forget Wall' at Ingalls Veterans Memorial Plaza.

Nikoui's remains are slated to return home on Sept. 17. A procession will be held later that day.