Business owners in Venice say they're struggling with the local homeless population. The general manager of Baja Cantina say they beefed up security after a recent break-in. Then days later, someone broke in through the roof.

LOS ANGELES - After trying all the usual entry points to a popular Venice restaurant, a homeless man broke in through a skylight on the roof, raided the cabinets of top-shelf liquor, caused thousands of dollars in damage, and passed out on the floor until police arrived to arrest him. It was the thief’s second break-in at the same restaurant in a week.

Security video showed two feet dangling from the ceiling of Venice’s Baja Cantina early Sunday morning, moments before the thief lowered himself inside. He then headed straight for the bar, pulling out multiple bottles of top-shelf liquor and drinking directly from them. For the next hour and a half, the increasingly intoxicated intruder downed multiple bottles, smoked cigarettes, broke a refrigerator, and caused thousands of dollars' worth of damage.

Later Sunday morning, employees found him on the floor amidst the destruction - passed out cold. 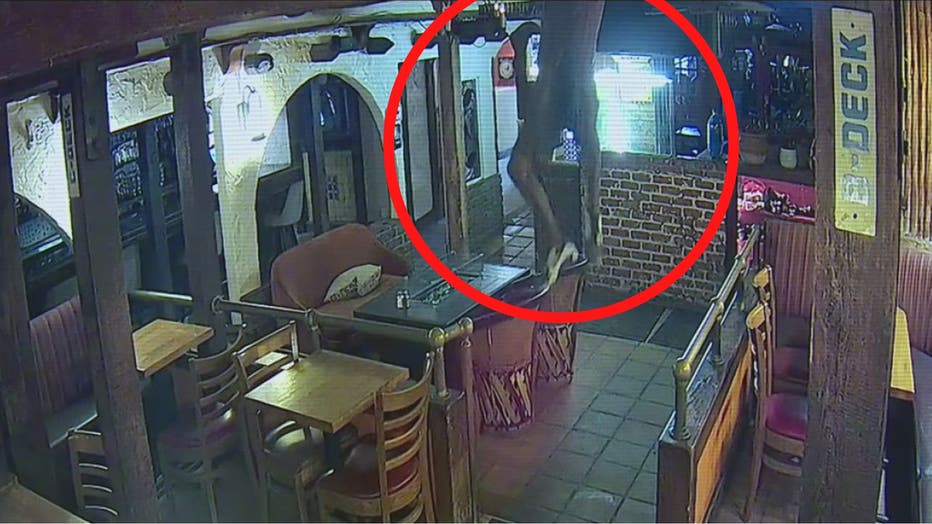 "It’s concerning when I get a phone call from my staffers at six in the morning - ‘Piero, there’s a guy in here!' Terrifying, because, you don’t know," said General Manager Piero Sanchez. He told his employees not to wake the intruder and to call police. They arrived about an hour later, and arrested the suspect.

Sanchez wasn’t surprised when he recognized the crook. He spotted him the night before, screaming and wandering in the middle of Washington Boulevard with no pants on. "It’s shocking, but the worst part is that you begin to normalize it," he said of the increasingly disturbing encounters locals have had with the homeless population.

The homeless problem in the Venice community has left people calling the area "lawless."

The same homeless suspect was seen on security video swiping a bottle of expensive Mezcal from the same restaurant just last week. The next morning, residents said they saw him meandering about the neighborhood, drinking from the bottle.

Since then, the restaurant beefed up its security measures, but no one thought the roof needed to be included. Sanchez wonders where it’s going to stop.

"If you’re building a fortress here, how inviting is that? Yeah, you’re safe, but will that be inviting to people? Is that what we want to portray to the hundreds of thousands of tourists and families that come out here? ‘Oh, you have a prison - you’re safe inside - but once you walk out those doors, it’s the Wild West,’" Sanchez said.