Report on possible UFO sightings due in Congress next month

LOS ANGELES - The U.S. government has been taking a hard look at unidentified flying objects, officially referred to as unidentified aerial phenomena or UAP, for decades leading up to the coming release of a highly anticipated report detailing everything military officials know about them.

The term UAP was introduced more recently, with some experts in the field feeling that it would be taken more seriously. Many people know the phenomena by the moniker "UFO."

While it remains unclear what exactly is in the coming report and when it will be released, people who download the FOX Super 6 app have the chance to win $5,000 if they correctly guess some of the contents of the mysterious cache of intel.

When former President Donald Trump signed into law a massive $2.3 trillion coronavirus relief package in 2020, it triggered a countdown to a deadline by which the director of national intelligence and the secretary of defense must provide lawmakers a report on everything they know about UAP like the ones seen in recently leaked footage.

Buried within the thousands of pages of legislation under the "Committee Comments" section of the Intelligence Authorization Act for Fiscal Year 2021, a stipulation requested a report to senators on intelligence and armed services committees regarding any information surrounding UAP sightings and whether they present any potential threat.

While the exact nature of the purported extraterrestrial threats was unknown, former Director of National Intelligence John Ratcliffe spoke with FOX News’ Maria Bartiromo in March, saying "there are a lot more sightings" than the public is aware of.

Recently, U.S. lawmakers met to discuss the contents of the report and determined that UAP could be a threat to national security.

"We take the issue of unexplained aerial phenomena seriously to the extent that we’re dealing with the safety and security of US military personnel or the national security interests of the United States, so we want to know what we’re dealing with," said Rep. Sean Patrick Maloney, D-N.Y., according to the New York Post. 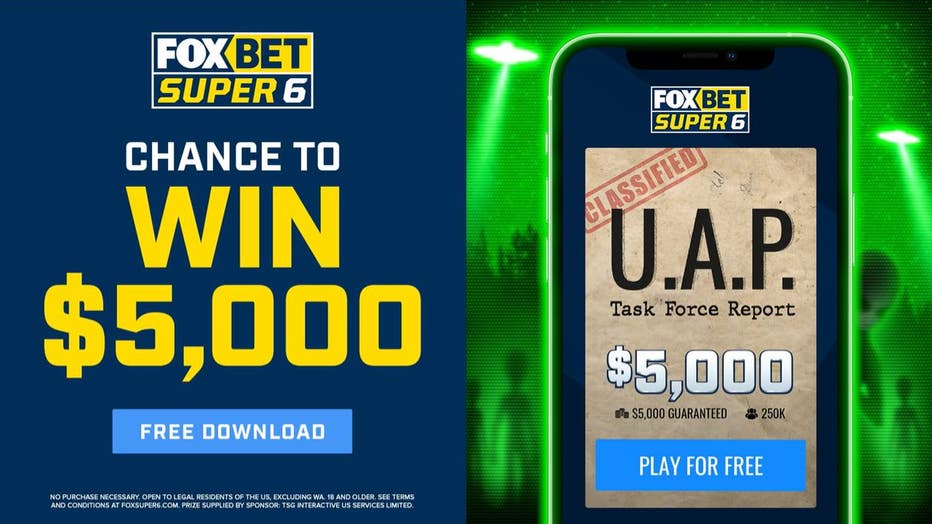 "I think it’s important to understand that there are legitimate questions involving the safety and security of our personnel, and in our operations and in our sensitive activities, and we all know that there’s [a] proliferation of technologies out there," Maloney added. "We need to understand the space a little bit better."

The chairman of the Capitol Hill committee, Rep. Adam Schiff, D-Calif., called the meeting "interesting," saying that he learned things "that were certainly new" to him, but Schiff would not go into detail about what he learned.

"We’re looking forward to having a public hearing at some point," Schiff said. "I mean, there’s some national security concerns that we want to take into consideration."

This FOX Super 6 contest could prove to be the most mysterious challenge yet, since little is known about UAP.

Are they aliens? Do they come in peace?

These are just a few factors to consider when playing the FOX Super 6 contest.

In September, the U.S. Navy acknowledged that three UFO videos which were released by former Blink-182 singer Tom DeLonge and published by The New York Times were of real "unidentified" objects.

The videos in question, known as "FLIR1," "Gimbal" and "GoFast," were originally released to the New York Times and to The Stars Academy of Arts & Science (TTSA). In December 2017, FOX News reported that the Pentagon had secretly set up a program to investigate UAP at the request of former Sen. Harry Reid of Nevada.