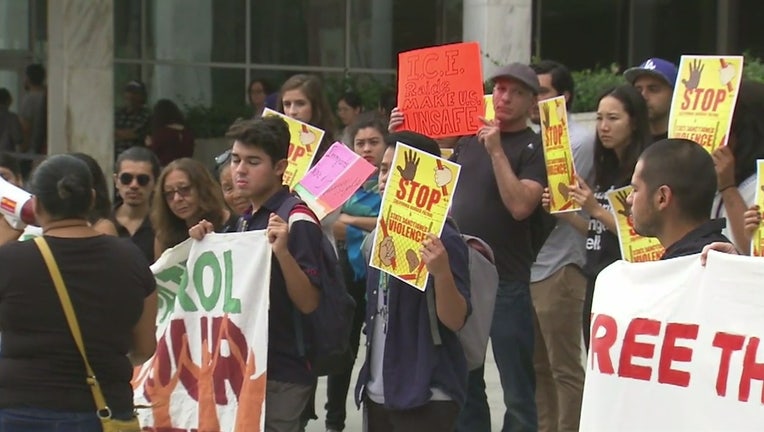 ``This bill states that local authorities will not ask about immigration status during routine interactions,'' Brown said in a message explaining his decision to sign Senate Bill 54. ``It also bans unconstitutional detainer requests and prohibits the commandeering of local officials to do the work of immigration agents.''

But Brown also stressed what the bill ``does not do.''

``This bill does not prevent or prohibit Immigration and Customs Enforcement or the Department of Homeland Security from doing their own work in any way,'' he said. ``They are free to use their own considerable resources to enforce federal immigration law in California. Moreover, the bill does not prohibit sheriffs from granting immigration authorities access to California jails to conduct routine interviews, nor does it prevent cooperation in deportation proceedings for anyone in state prison or for those in local jails for any of the hundreds of serious offenses listed in the TRUST Act.

``These are uncertain times for undocumented Californians and their families, and this bill strikes a balance that will protect public safety, while bringing a measure of comfort to those families who are now living in
fear every day,'' he said.

He said the measure ``won't stop ICE from trolling our streets -- it will not provide full sanctuary -- but it will put a kink in (President Donald) Trump's perverse and inhumane deportation machine.''

U.S. Attorney General Jeff Sessions has warned that the federal government could withhold federal grant funds from ``sanctuary jurisdictions'' that limit local agencies' work with immigration agents, although Sessions'
threat has been challenged in court and temporarily stalled by a federal judge.

Some law enforcement organizations had opposed the legislation, but at least one -- the California Police Chiefs Association -- removed its opposition and took a neutral position after the bill's language was amended in September.

Orange County Sheriff Sandra Hutchens criticized the legislation, saying restrictions on the ability to communicate with federal authorities ``will hinder current collaborative efforts to remove serious offenders from our community.''

``This law is inconsistent with widely accepted best practices of open communication amongst all levels of law enforcement,'' Hutchens said.

``The new law prohibits certain communications, but not all cooperation is
restricted. The Orange County Sheriff's Department remains committed to cooperating fully with federal authorities in all areas where the sheriff has discretion. The department's objective is to work with federal authorities to remove serious offenders from our community.''