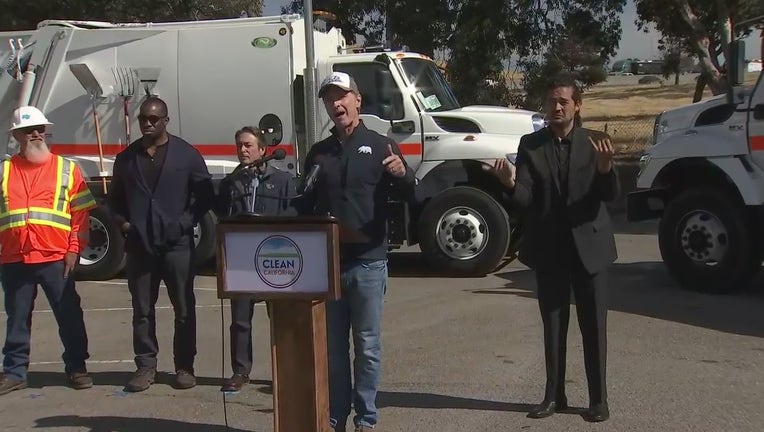 "The state is too damn dirty," Newsom said, saying that tax dollars must be used more wisely, noting the state's huge surplus this year. Newsom said there is no better return on investment than cleaning up streets and revitalizing the community by hiring 11,000 people.

The program is complemented by the state's $12 billion homelessness plan to provide safer housing and shelter alternatives to people living in encampments.

The cleanup comes amid growing frustration with homeless encampments that have sprouted under highway overpasses and near freeway exit and entry ramps throughout California in the past few years. The encampments have grown during the pandemic, and many are crammed with discarded sofas, mattresses and other trash.

An estimated 161,000 people are experiencing homelessness in the nation’s most populous state, more than in any other. Advocates say they can’t house people quickly enough with a shortage of housing units and high rents.

The Clean California program funds are not allowed to be used to displace people experiencing homelessness.

Speaking in Richmond, Caltrans director Toks Omishakin said he was thrilled to be able to put his crews to work and put a dent in the "trash problem that has plagued the state for many, many years, for decades."

Caltrans city and county governments have tried for years to try to to do litter abatement work, but officials said it hasn't really worked. Newsom’s office said Caltrans collected 270,000 cubic yards of trash in 2020 — enough to load 18,000 garbage trucks.

"And that work generally you could say, hasn't been successful," Omishakin said. "We haven't been able to bring this major challenge to any kind of conclusion, to any kind of end. But I believe I think we're at this moment today."

One of those moments was to introduce Terry Billingsly, a former drug addict and formerly incarcerated man who now is a happily employed Caltrans maintenance worker.

When he was released from custody, Billingsly said he went to work for the Rio Vista Bridge crew.

He talked about how wonderful it was to now have a job, be reunited with his children and own a home and a Harley and said "life is good."