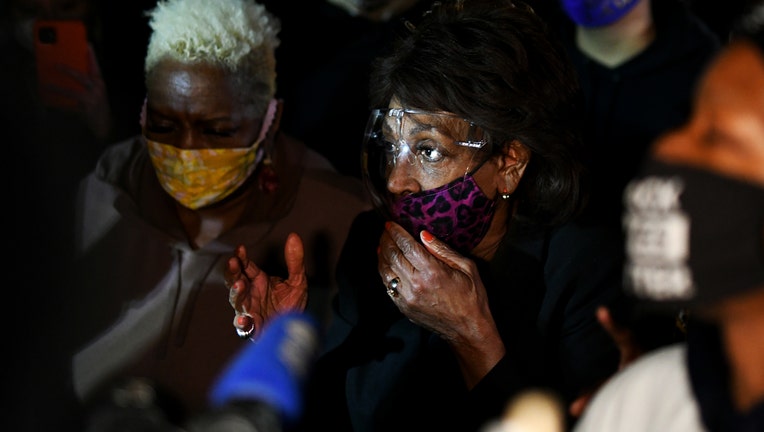 BROOKLYN CENTER, Minn. - U.S. Rep. Maxine Waters is drawing heat from some Republicans who are accusing her of "threatening violence" and "inciting a riot" ahead of the verdict in Derek Chauvin’s murder trial. Closing arguments are set for Monday and a verdict could come as early as this week.

Waters was in Brooklyn Center, Minn. on Saturday and joined the crowd on the streets protesting the deadly police shooting of Duante Wright. Hundreds of people have been gathering daily outside the heavily guarded Brooklyn Center police station since Sunday, when former Officer Kim Potter, who is White, shot the 20-year-old Black man during a traffic stop.

"This is a very difficult time in the history of this country," Waters said. "We have to let people know that we are not going to be satisfied unless we get justice in these cases."

No curfew will be in place in Brooklyn Center as protests continue for a sixth consecutive night following the deadly police shooting of Daunte Wright. For much of the week, the city has issued an evening curfew in response to the protests.

Brooklyn Center is a suburb of Minneapolis, which is where George Floyd was killed during an encounter with police nearly a year ago. The trial for Chauvin, the officer involved, is ongoing.

On Saturday, Waters was asked her thoughts if Chauvin were to be found not guilty. Chauvin is accused of killing Floyd on May 25, 2020 after he was seen on video kneeling on Floyd's neck for several minutes. He's charged with third-degree murder, second-degree murder and second-degree manslaughter.

Waters said she was "hopeful" Chauvin would be convicted of murder, but if he isn't she said, "we cannot go away."

The 82-year-old congresswoman decried the 11 p.m. curfew set by authorities in Brooklyn Center as a way to tamp down demonstrations.

"Why is Maxine Waters traveling to a different state trying to incite a riot? What good can come from this?" Rep. Lauren Boebert, R-Colo., wrote on Twitter.

Rep. Majorie Taylor Greene said she plans to introduce a resolution to expel Waters from Congress, calling her a "danger to society."

"As a sitting United States Congresswoman @MaxineWaters threatened a jury demanding a guilty verdict and threatened violence if Chauvin is found not guilty. This is also an abuse of power," Greene tweeted.

FOX News and the Associated Press contributed to this report. This story was reported from Los Angeles.