An emergency alert went out to people across LA and Orange counties Saturday morning, alerting residents of a fire that didn't exist. Officials say a software error caused the message to go out without language saying it was simply a test.

GLENDALE, Calif. - Did you receive this emergency alert Saturday morning? Well, you're not alone.

It appears an emergency alert asking residents in the Chevy Chase Canyon of Glendale to evacuate was just a drill, city officials said.

The alert was sent out at 9:10 a.m., however there was no indication in the alert of it being a drill exercise. About 30 minutes later, another emergency alert went out telling residents to disregard the evacuation message as it was training exercise only. 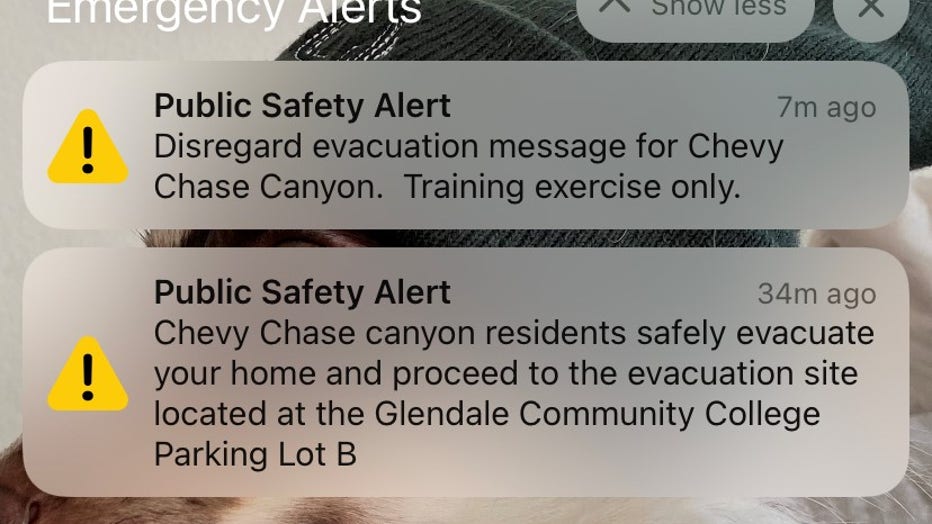 However, the loud alert on a Saturday morning didn't sit well with many people. Several people took to Twitter to complain about why they were receiving a Glendale community message while living in other parts of Los Angeles County, and of course many wondered why the city didn't mention it was a drill.

Several people on Twitter say they got the message in Ventura County, San Gabriel Valley and the South Bay.

"The emergency alert that just went to people’s phones didn’t make clear that this was for an exercise and not an actual emergency. Great way to cause panic and confusion for nearby residents," said one Twitter user.

"Well, glad you are only testing, as the emergency alert reached all of LA, and it did NOT specify a drill. You are going to freak some people out unnecessarily," wrote another user.

The city of Glendale said there was an "error in the tech" that sent the message.

"There was an apparent glitch in the software system where the message went out county wide, obviously that was not what we planned for. We had hoped to evacuate only the canyon of Chevy Chase," said Glendale city fire chief Silvio Lanzas.

He says the drill was planned for months. They evacuated 5,000 canyon residents and completed the drill within 45 minutes.