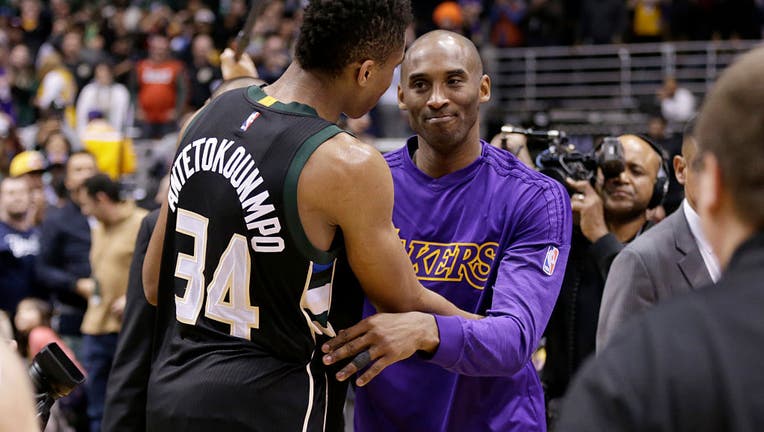 LOS ANGELES - A prediction made by late NBA legend Kobe Bryant came to fruition Tuesday night after Giannis Antetokounmpo led the Milwaukee Bucks to an NBA championship against the Phoenix Suns.

Milwaukee Bucks' power forward Antetokounmpo won back-to-back NBA MVP awards for the 2018-19 and 2019-20 seasons. After the dominant two-way player dubbed the "Greek Freak," won league MVP in June 2019, Bryant spoke about his "greatness" and said that his next stop would be an NBA championship title.

On Tuesday night, Antetokounmpo delivered and he did it in style. He scored 50 points and led the Bucks to their first NBA title in 50 years, also adding 2021 NBA Finals MVP to his growing list of accolades.

Bryant’s former teammate and close friend, Pau Gasol, shared Bryant’s 2019 prediction with the caption: "He did it, brother."

In addition, the power forward also won the Kobe Bryant MVP Award as a member of Team LeBron following the 2021 NBA All-Star Game in March.

After Bryant retired from the NBA, he focused on spending time with his family, building his media empire, and coaching Team Mamba, his daughter Gigi’s basketball team.

However, he continued to follow the NBA and still managed to make time as a mentor for the league’s rising stars including Jayson Tatum, Devin Booker, and Kawhi Leonard.

A new mural commemorating Kobe Bryant's on-court feats -- the five NBA championshios -- and off-court accomplishments -- like an Oscar -- was unveiled in the heart of Hollywood.

Bryant and Gigi shared a love for the game of basketball and she was determined to carry her father's legacy.

One of Bryant’s final public appearances was when he attended a Lakers game against the Dallas Mavericks with Gigi. Dallas’ Luka Doncic was one of Gigi’s favorite players.

Gone but not forgotten, Bryant's legacy continues to live on through the NBA.