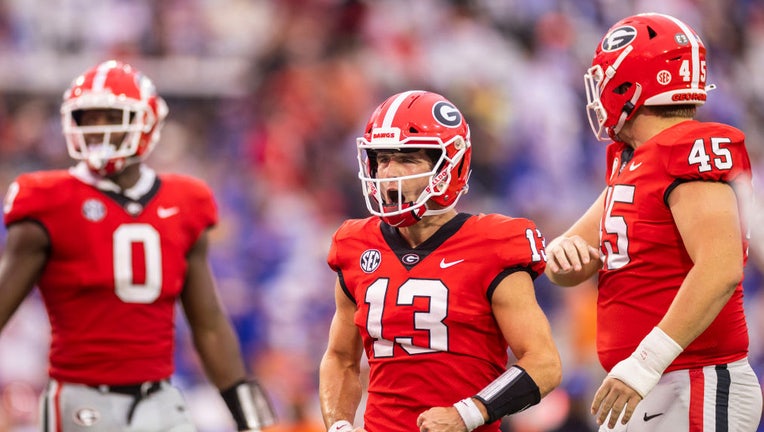 Stetson Bennett #13 of the Georgia Bulldogs reacts during the first half of a game against the Florida Gators at TIAA Bank Field on October 29, 2022 in Jacksonville, Florida. (Photo by James Gilbert/Getty Images)

Tennessee's rise this season has set the table for one of the best treats in college football: No. 1 vs. 2.

By climbing into a tie with Ohio State, the Volunteers will play No. 1 Georgia on Saturday in just the 25th regular-season meeting between the top two teams in the AP Top 25. It will be the first 1-vs.-2 matchup since LSU beat Alabama in 2019 on the way to the national championship.

The Vols won seven games last season, started this season unranked and picked to finish third in the SEC East. Tennessee (8-0, 4-0 SEC) has since turned into the story of the season, piling up a long list of wins against teams ranked at the time: No. 17 Pittsburgh, No. 20 Florida, No. 25 LSU, No. 3 Alabama and No. 19 Kentucky.

The Vols are off to their best start since 1998, when they won their last national championship, and have their highest ranking since 2001. Their resume was good enough to earn the Vols the top spot in the first College Football Playoff rankings, ahead of Ohio State, Georgia and Clemson.

This is one of those games you don't want to miss.

The What to Watch rundown for this week of college football, presented by Regions Bank:

The Crimson Tide is very much in the thick of the CFP race despite losing to Tennessee, opening at No. 6 in the initial playoff rankings. Alabama (7-1, 4-1 SEC) bounced back from its only loss with a 30-6 win over Mississippi State last week and has won 10 of 11 against LSU, the lone loss coming in 2019.

Both teams are tied atop the SEC West with No. 11 Mississippi, which has a loss to LSU and hosts Alabama on Nov. 12.

Hooker may have moved into frontrunner status for the Heisman Trophy after throwing for 245 yards and accounting for four touchdowns in the win over Kentucky. Hooker has thrown for 2,338 yards and 21 touchdowns with one interception while completing 71.2% of his passes, which is 10th in the FBS.

Lead Tennessee to a win over Georgia and Hooker could make a huge impression on Heisman voters.

5 — Straight games with 100 yards rushing by Zach Charbonnet, the best stretch by a UCLA running back in 20 years.
9 — Years since No. 24 Oregon State had been ranked before moving into this week's poll.

Last week's 48-21 loss to Louisville hurt. Wake Forest had six turnovers in the third quarter, most in a quarter by an FBS team since 2010, and eight overall to plummet down the rankings.

NC State (6-2, 2-2, No. 22 CFP) has lost to Clemson and to No. 22 Syracuse. The Wolfpack learned before that game quarterback Devin Leary was out for the season and revamped their offense during the off week.

NC State needed some time to adjust to the new offense against Virginia Tech last week, but rallied from an 18-point deficit to win 22-21.

Jimbo Fisher, Texas A&M. The losses keep coming for Fisher and the Aggies.

Texas A&M already had a home loss to Appalachian State this season and has now lost four straight with last Saturday's 31-28 setback against Ole Miss. A team that started the season at No. 6 in the preseason poll is now 3-5 and a woeful 1-4 in the SEC.

Fisher has a guaranteed 10-year, $75 million deal that he signed in 2017, so it's going to take some deep pockets for Texas A&M to pull the trigger. That would seem to make him safe, but wealthy boosters may step in and say they've had enough.