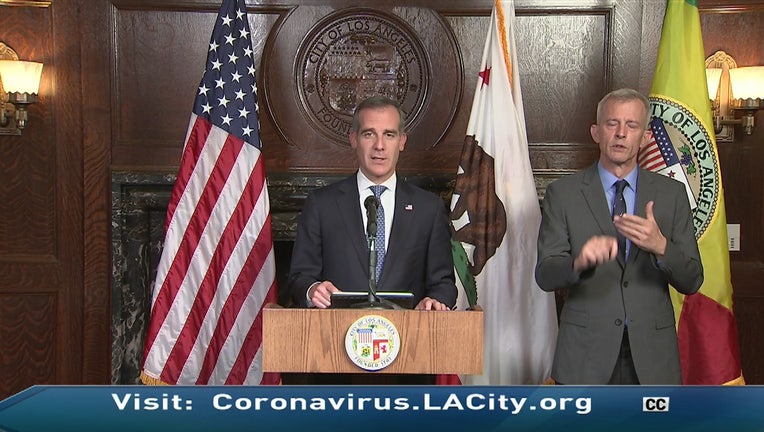 LOS ANGELES - Los Angeles Mayor Eric Garcetti Monday raised the city's emergency response status to its highest level due to the novel coronavirus outbreak, and he issued a series of new orders for the city, including delaying payment of parking tickets.

Raising the city's emergency status was done to request more assistance from the federal and state governments, as well as a public safety measure to stem the coronavirus spread, Garcetti said.

For two weeks, Los Angeles will not issue tickets during street sweeping hours in residential areas or to people who are helping local institutions. He said the city will also freeze parking fines until June 1.

Not all parking enforcement is stopping, Garcetti said, but he said he does want people to save their money for the time being. Metered parking spaces will also continue at businesses, which he said are dependent upon those spaces for the business that can be conducted.

Millions of people are being asked to stay home but LA's mayor is deciding not to impose a curfew. He is, however, making other changes.

"We know all Angelenos have had to make huge changes and sacrifices during this period," Garcetti said. "Today was the first day that our (Los Angeles Unified School District) schools were closed, and a change in routine like this can be very confusing, for both parents and students."

Garcetti said an announcement from the LAUSD is expected later tonight, but people can go to achieve.lausd.net for information relating to school children who are dependent on school meals.

"There's also been a tremendous amount of misinformation," Garcetti said, adding that he's heard rumors from friends and family about major closures that have not been announced. "There will be no surprises ... those rumors about a national lockdown are not true, today."

He said people should check with official sources such as the city of Los Angeles websites and the Centers for Disease Control and Prevention.