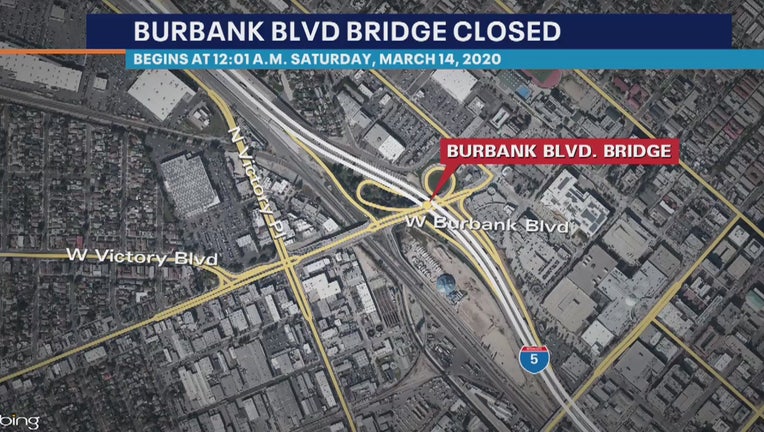 BURBANK, Calif. - Caltrans officials Thursday will announce the date of a 36-hour weekend closure of a section of the 5 Freeway as part of a project to demolish and replace the Burbank Boulevard bridge over the freeway.

The project is an effort that will necessitate a "long-term'" street closure set to begin late next week.

Burbank Boulevard between San Fernando Boulevard and Front Street will be closed in both directions to vehicles, cyclists and pedestrians starting at 12:01 a.m. on March 14 and will reopen sometime in 2021, according to Michael Comeaux of Caltrans.

Caltrans to announce full closure of 5 Freeway in Burbank

Caltrans officials are expected to announce the date of a 36-hour weekend closure along the 5 Freeway.

Caltrans will be closing the 5 Freeway near Burbank Boulevard for 36 hours over a weekend in the "near future," according to Comeaux. That closure will likely be the largest in the Los Angeles area since 10-mile sections of the 405 Freeway were closed during weekends in July 2011 and September 2012, dubbed "Carmageddon" 1 and 2.