Freddie Freeman, struggling to fight back tears, says he 'loves the Braves with all my heart'

During an extremely emotional pre-game press conference, former Braves Freddie Freeman discussed how much his old team means to him and how it will feel to get his 2021 World Series ring at Truist Park on Friday. It was a hard interview to watch as the former Braves first baseman struggled to fight back tears talking about his old team and his fans.

"I will not stand by as the circumstances surrounding Freddie Freeman’s departure from Atlanta are mischaracterized," agent Casey Close of Excel Sports Management said in a statement Thursday.

Freeman was in tears and at times could barely speak when talking to reporters in Atlanta last week, his first trip back to the city where he had played his entire career before leaving for the West Coast. He was warmly welcomed by Braves fans. He helped the team win the World Series last season and was presented his ring by Braves manager Brian Snitker.

Freeman’s return came at the same time that he apparently fired Excel as his management team. Asked about that, he described the relationship as "fluid."

The Braves and Freeman had been negotiating a new contract after the 2021 season ended. They didn’t reach an agreement, and Freeman filed for free agency but didn’t sign before baseball entered a labor lockout Dec. 1 that prompted a roster freeze. 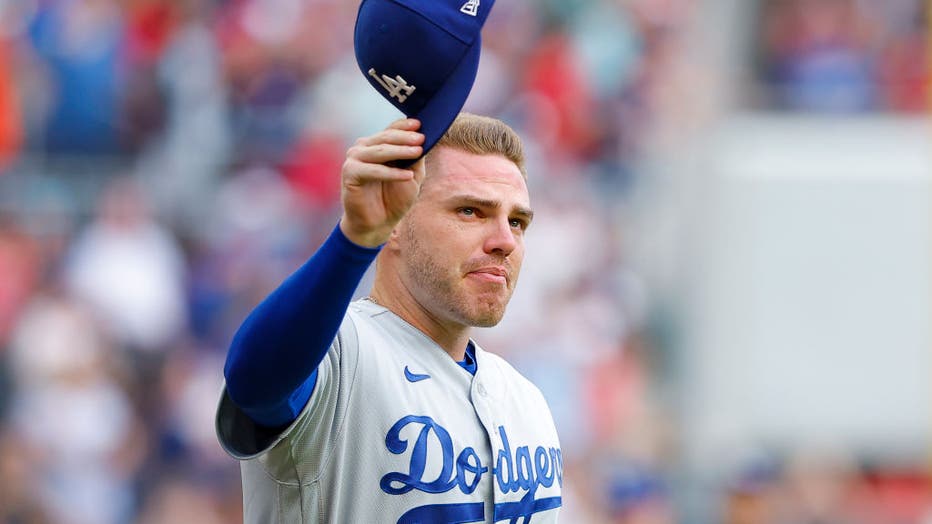 Freddie Freeman gets emotional as he is introduced to the crowd before the game against the Atlanta Braves at Truist Park on June 24, 2022. (Photo by Todd Kirkland/Getty Images)

On Wednesday, FOX Sports Radio Host Doug Gottlieb said he was told the final offer the Braves made to Freeman was "close" to the offer Los Angeles made, and his agency never told him about the Atlanta offer.

"He found out over the weekend just how close Atlanta had come in their final offer, called up Casey Close and said, ‘You didn’t tell me about this offer? You're fired,'" Gottlieb said during "The Doug Gottlieb Show" on FOX Sports Radio.

Gottlieb said, according to "really good sources in the business," Close thought there were better opportunities with the Dodgers.

"And that's why he never told him," Gottlieb said.

Freeman declined Wednesday to comment on Gottlieb’s tweet reporting Freeman fired Close because he didn’t tell him about the Braves’ final contract offer in March.

"Doug Gottlieb tweeted a wholly inaccurate characterization of our negotiations with the Atlanta Braves on behalf of Freddie Freeman. We are immediately evaluating all legal options to address the reckless publication of inaccurate information," Close said in a statement Wednesday.

Since March, the Braves have fostered a narrative about the negotiations which, stated plainly, is false. Part of the false narrative is the suggestion that I did not communicate a contract offer to the Freemans.

— An excerpt from Excel Sports' statement.

Close said the Braves have also been perpetuating a story about the contract negotiations that is false.

"Part of that false narrative is the suggestion that I did not communicate a contract offer to the Freemans," Close said in the statement. "To be clear, we communicated every offer that was made, as well as every communication Excel had with the Braves organization throughout the entire process."

Freeman expressed no regrets last week about signing with the Dodgers, although his outpouring of emotions caught the attention of his new teammates.

"That’s something that Freddie’s got to deal with, but certainly there’s more talk of it in our clubhouse," manager Dave Roberts said Thursday.

Former Braves first baseman Freddie Freeman may be in a Dodgers uniform now, but he is expected to get a warm reception at Truist Park for his previous home crowd. Freeman will get his 2021 World Series Championship ring before Fridays game.

In the statement, Close emphasized his 30-year career in baseball and his reputation for integrity and honesty.

"I have always operated with the utmost character," he said. "We always put the player’s goals and best interests first and will always continue to do so."

The Dodgers returned from a nine-game trip early Thursday and didn’t have batting practice before hosting the San Diego Padres. Freeman was not available to speak to reporters.

Excel Sports' full statement on behalf of Close is below:

I will not stand by as the circumstances surrounding Freddie Freeman's departure from Atlanta are micharacterized. Since March, the Braves have fostered a narrative about the negotiations which, stated plainly, is false. Part of the false narrative is the suggestion that I did not communicate a contract offer to the Freemans. To be clear, we communicated every offer that was made, as well as every communication Excel had with the Braves organization throughout the entire process. I have a 30-year reputation in this business for integrity and honesty, and I have always operated with the upmost character. At Excel, we are privileged to represent many exemplary athletes, some of whom have chosen to spend their entire careers with one franchise. We always put the player's goals and best interest first and will always continue to do so.