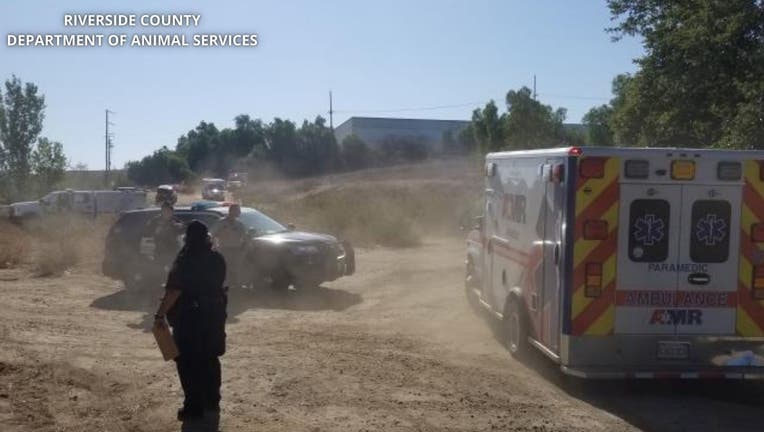 RIVERSIDE COUNTY, Calif. - Four people were injured after a pit bull attacked her own owner and friends inside their RV.

Riverside County Sheriff’s deputies and firefighters with CAL FIRE/Riverside County Fire Department responded to an area of the Santa Ana River around 8:30 a.m. Friday after receiving an emergency call.

According to the Riverside County Department of Animal Services, the 3-year-old pit bull initially attacked her owner then turned on two others inside the RV. A fourth victim was bit on the arm as he tried to pull one of the victims out of the RV. All four suffered bite wounds and were taken by ambulance to the hospital with non-life-threatening injuries.

It is unknown what sparked the attack but the department says the dog had just given birth to puppies and that may have played a role in her behavior.

The dog was transported to the animal shelter in Jurupa Valley and was later euthanized.

Animal services says this incident follows another dog attack that happened about a week earlier in the same area of the river. On July 26, two stray dogs attacked a man who was fishing. The two attacks are not related but officials are urging the public to be cautious when near the Santa Ana River.

"We know the Santa Ana River area is used by families recreating in the water with picnics and beach chairs. But parents should be vigilant in keeping an eye on toddlers and themselves if they come across an unleashed dog. The dog could be feral or vicious," Animal Services Lt. James Huffman said in a statement.