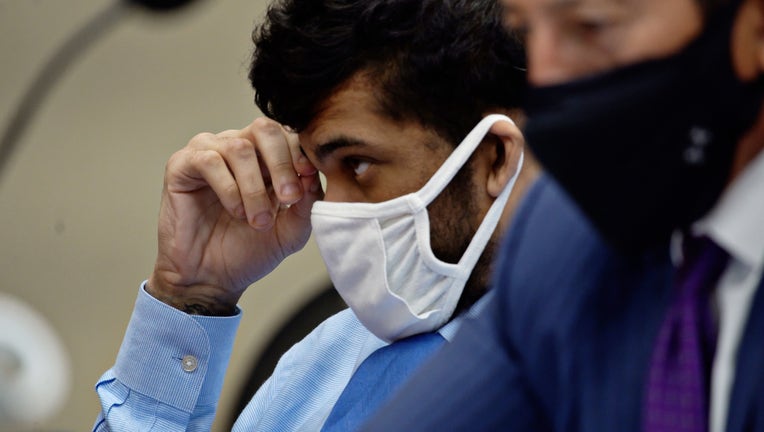 CORONA, Calif. - A former Major League Baseball prospect was convicted Thursday of beating three people to death, including his disabled father, at their family home in Corona in 2015, prosecutors said.

On Tuesday, Brandon Willie Martin, 27, was found guilty of the murders of his father, Michael Martin, 64; his uncle, Ricky Andersen, 58; and Barry Swanson, 62, an ADT alarm installer.

After four hours over two days of deliberating, the jury found Martin guilty on all seven counts, including first-degree murder. The jury also found the special circumstance of multiple murders to be true, which makes Martin eligible for the death penalty.

On Monday, the same jurors will begin hearing evidence and testimony in the penalty phase of the trial and will ultimately decide whether Martin should be sentenced to death or life in prison without the possibility of parole.

Prosecutors said that on Sept. 17, 2015, the three men were beaten to death with a black wooden baseball bat engraved with Brandon Martin’s name. His father and Swanson died at the scene, and Andersen died two days later.

Two days prior to the murder, on Sept. 15, police were called to the family home because of threats being made by Martin. Authorities decided to take Martin to a Riverside Psychological hospital for evaluation. Doctors at that hospital released him on the day of the murders.

Swanson was at the Martin family home on Winthrop Drive in Corona to install an ADT alarm system "because the family feared Brandon Martin," the Riverside County District Attorney's Office wrote in a press release.

The bodies of the three men were discovered by Martin’s cousin, who called 911.

After the three victims were beaten at the home, Martin stole Swanson’s Ford Raptor pickup.

The next day, Corona police spotted the pickup and Martin led them on a pursuit in Corona. At the end of the vehicle pursuit, Martin ditched the truck and fled on foot. In his attempt to evade officers, he broke into a home where he jumped from a second-story window. Corona police sent a police canine to detain Martin. After fighting with the canine, Martin was arrested.

In 2011, Martin was the 38th overall Major League Baseball draft pick, selected by the Tampa Bay Rays. In 2014, because of what was described as "personal matters," he missed the entire season. He was released by the team in March 2015.