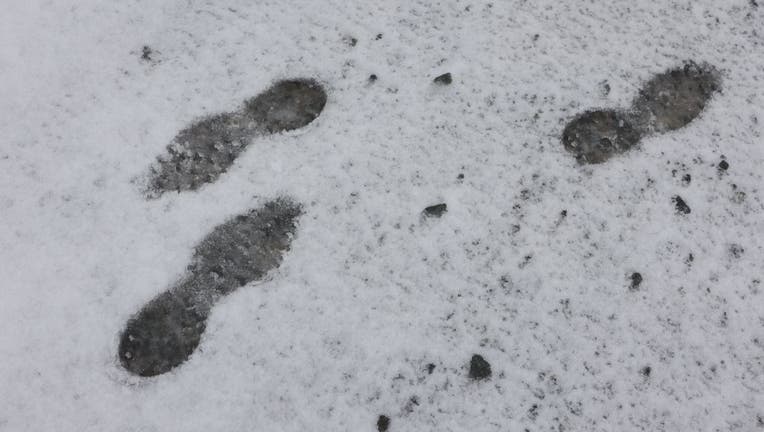 FILE PHOTO: Footprints are on the ground covered with snow. ((Photo by Matthias Bein/picture alliance via Getty Images))

The Isanti County Sheriff's Office says deputies responded to a report of a suspicious person in camouflage walking around a building on the 3100 block of 305th Avenue Northeast in Isanti Township shortly after 10 a.m. Deputies found "fresh footprints in the snow," which confirmed someone had been going around the buildings.

The footprints went east and into a wooded swamp area, a news release said. Near the swamp line, deputies saw a man who appeared to be under the influence on a controlled substance, the release said.

Deputies did speak to neighbors, who said they didn't see anything suspicious. They were told to stay inside and keep their doors locked, the release said.

Authorities said they found evidence that indicated the suspect went into buildings on the property. The 45-year-old Wyoming, Minnesota, man was then arrested for probable cause second-degree burglary,

The sheriff's office said the suspect made "spontaneous statements admitting to the crime" and that connected him to a vehicle that was found in a ditch hours earlier.

The sheriff's office said this case is an example of why it's important for people to report suspicious activity to authorities.