SURFSIDE, Fla. - Emergency workers gave up Wednesday on any hope of finding survivors in a collapsed Florida condo building, telling sobbing families that there was "no chance of life" in the rubble as crews shifted their efforts to recovering more remains.

The announcement followed increasingly somber reports from emergency officials, who said they sought to prepare families for the worst.

"At this point, we have truly exhausted every option available to us in the search-and-rescue mission," Miami-Dade Mayor Daniella Levine Cava said at a news conference.

Eight more bodies were recovered from the site, bringing the death toll to 54, the mayor said. Thirty-three of the dead have been identified, and 86 people are still unaccounted for.

Miami-Dade Assistant Fire Chief Raide Jadallah told families at a private briefing that crews would stop using rescue dogs and listening devices but would continue to search for remains.

Officials in Miami-Dade County, Florida announced a shift from rescue and rescue efforts to a search and recovery mission at the site of the Surfside condo collapse. The death toll of the tragedy has now risen to 54 people.

"Our sole responsibility at this point is to bring closure," he said, as relatives cried in the background.

The search for victims and any potential survivors entered its 14th day on Wednesday at the site of the former Champlain Towers South building in Surfside, located just north of Miami Beach. Since the June 24 collapse, crews have been working around the clock.

Though teams have found no new signs of survivors, authorities said their mission was still geared toward finding people alive — while also aiming to bring closure to loved ones desperately waiting for news each day.

"Right now, we’re in search and rescue mode," the county's police director, Freddy Ramirez, said at a news conference Tuesday evening. "Our primary goal right now is to bring closure to the families."

The teams were able to access new areas of the rubble this week after workers on Sunday tore down the unstable portion of the building that was still standing after the initial collapse, leading to the discovery of additional bodies and remains.

No one has been rescued from the site since the first hours after the building collapsed when many of its residents were asleep. Searchers were still looking for any open spaces within the mounds of rubble where additional survivors might be found, said the county's fire chief, Alan Cominsky.

Levine Cava said the families of the missing were preparing for news of "tragic loss." She said President Joe Biden, who visited the area last week, called Tuesday to offer his continued support.

"I think everybody will be ready when it’s time to move to the next phase," she said. 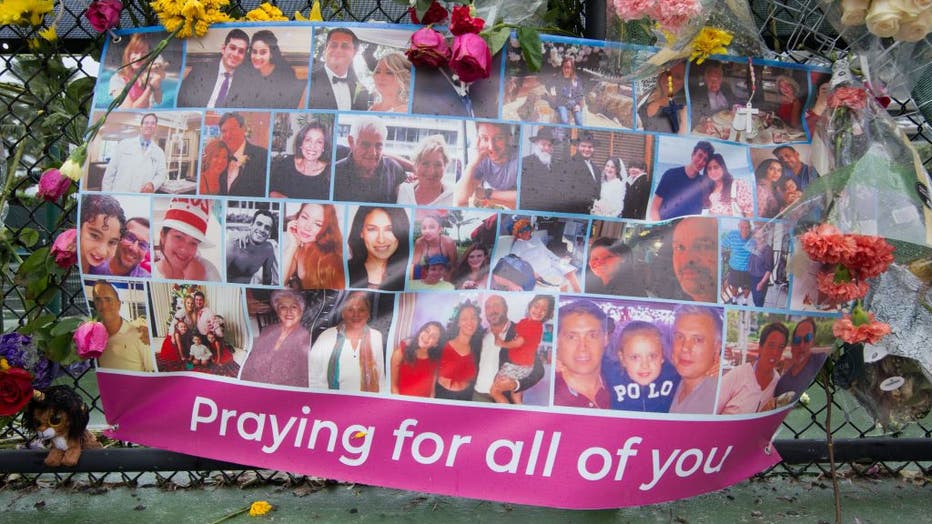 A makeshift memorial is seen near the site of the collapsed residential building in Miami-Dade County, Florida, the United States, on July 6, 2021. (Photo by Monica McGivern/Xinhua via Getty Images)

Teams also faced thunderstorms as Tropical Storm Elsa moved toward Florida. Lightning forced crews to pause the search this week and a garage area in the rubble also filled with water on Monday, officials said.

However, the brunt of the storm was set to bypass Surfside and neighboring Miami as Elsa weakened along its path to an expected landfall somewhere between Tampa Bay and Florida’s Big Bend.

The cause of the collapse of the Champlain, which was built in 1981, remains under investigation. Crews have removed 124 tons of debris from the site, which was being sorted and stored in a warehouse as potential evidence, officials said.

A 2018 engineering report found that the building's ground-floor pool deck was resting on a concrete slab that had "major structural damage" and needed extensive repairs. The report also found "abundant cracking" of concrete columns, beams and walls in the parking garage.