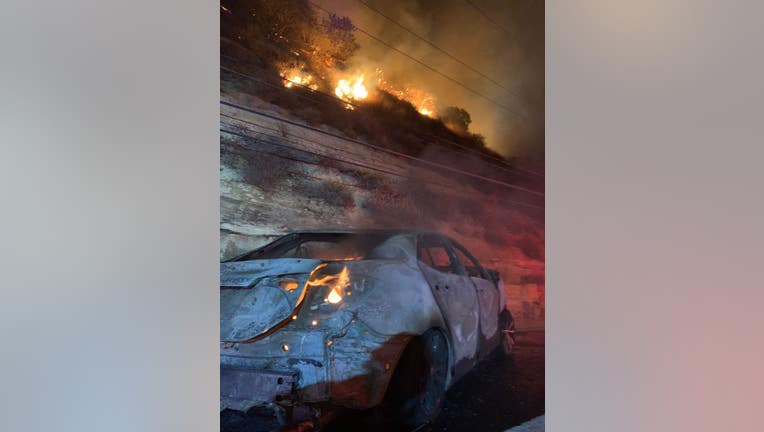 IRVINE, Calif. - Firefighters contained a 5-acre brush fire that ignited in Santiago Canyon following a solo-vehicle crash in an unincorporated Orange County area near Irvine early Thursday morning. The driver who was pulled by good Samaritans was later booked on suspicion of DUI, officials said.

No injuries were reported in a fire near Irvine early Thursday morning.

The crash was reported at 3:40 a.m. on northbound State Route 241 near Santiago Canyon Road. The overturned Toyota Corolla was fully engulfed in flames and sparked a fire on a nearby hillside, California Highway Patrol said.

The driver, identified as Eric Lopez, 26, was pulled from the crash by good Samaritans, the CHP said.

Lopez refused to take a DUI test and was taken to Orange County Global Medical Center to be treated for a broken collar bone, CHP Officer John DeMatteo said.

A combination of ground crews and night dropping helicopters were used to extinguish the fire.

Santiago Canyon Road from Loma Ridge Road to State Route 241 was expected to be closed until at least noon.