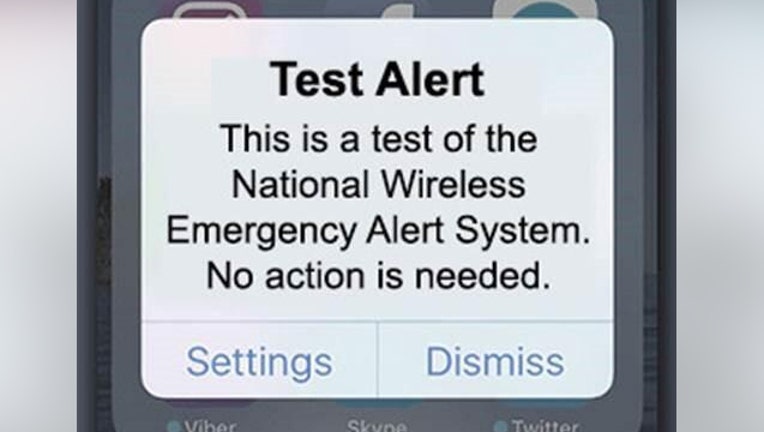 WASHINGTON (FOX 5 DC) - Don't be caught off guard Wednesday if you get an emergency alert on your television, radio or cell phone.

The Federal Emergency Management Agency (FEMA), in coordination with the Federal Communications Commission (FCC), will conduct a nationwide test at 2:20 p.m. EST on Wednesday, August 11.

Officials say test messages will be sent to televisions and radios, along with select cell phones that have opted-in to receive test messages.

"The Wireless Emergency Alert portion of the test will be directed only to consumer cell phones where the subscriber has opted-in to receive test messages," FEMA posted online. "This will be the second nationwide WEA test, but the first nationwide WEA test on a consumer opt-in basis. The test message will display in either English or in Spanish, depending on the language settings of the wireless handset."

This week’s testing will be the sixth test of the nationwide public alert and warning systems and has been planned since June 2020.

The EAS national test is very similar to regular monthly tests typically originated by state authorities. During the test, radios and televisions across the country may interrupt normal programming to play the EAS test message. The message may be delivered in English or Spanish. The EAS test message is approximately one minute long and the audio will say:

"This is a test of the National Emergency Alert System. This system was developed by broadcast and cable operators in voluntary cooperation with the Federal Emergency Management Agency, the Federal Communications Commission and local authorities to keep you informed in the event of an emergency. If this had been an actual emergency an official message would have followed the tone alert you heard at the start of this message. No action is required."

The visual message, which will only be displayed on televisions, may vary depending on the station. The message will include, at a minimum, the originator, event, location, valid time period of the message and the time the message was transmitted. For example, the text may read: "A Primary Entry Point system has issued a National Periodic Test for all of the United States beginning at 2:20 PM and ending at 2:50 PM on AUG 11, 2021 (station ID)."

The test message sent to the WEA infrastructure will only be received by specially configured phones and will read:

"THIS IS A TEST of the National Wireless Emergency Alert System. No action is needed."