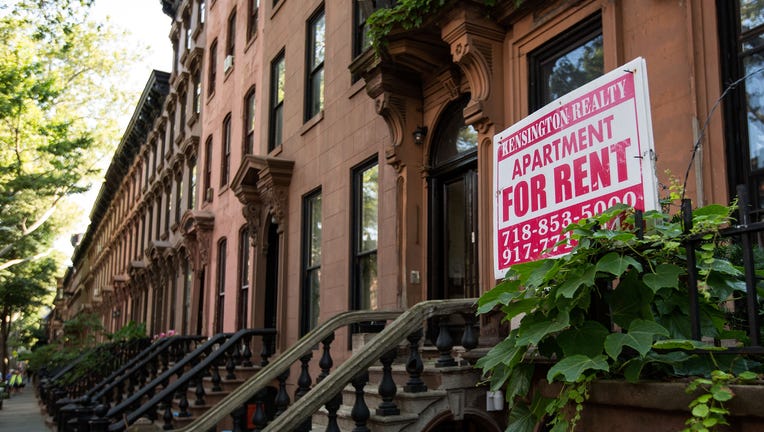 A sign advertises an apartment for rent along a row of brownstone townhouses in the Fort Greene neighborhood on June 24, 2016 in the Brooklyn borough of New York City. (Photo by Drew Angerer/Getty Images)

WASHINGTON - The Department of Justice has filed an appeal after a federal judge threw out a national eviction moratorium Wednesday, putting millions of tenants at risk of losing their homes for not paying rent during the COVID-19 pandemic.

According to the Wall Street Journal, U.S. District Court Judge Dabney Friedrich issued the ruling, saying the U.S. Centers for Disease Control and Prevention didn’t have the power to issue the COVID-19 pandemic relief measure. The ruling came in a lawsuit filed by the Alabama Association of Realtors against the Department of Health and Human Services. The realtors claimed the CDC exceeded its authority in issuing the moratorium.

"The department has already filed a notice of appeal of the decision and intends to seek an emergency stay of the order pending appeal," Acting Assistant Attorney General Brian M. Boynton said in a statement to FOX Television Stations. "In the department’s view, that decision conflicts with the text of the statute, Congress’s ratification of the moratorium, and the rulings of other courts."

"The CDC’s eviction moratorium... protects many renters who cannot make their monthly payments due to job loss or health care expenses," the statement continued. "Scientific evidence shows that evictions exacerbate the spread of COVID-19, which has already killed more than half a million Americans, and the harm to the public that would result from unchecked evictions cannot be undone."

CDC directs halt to renter evictions through end of 2020

Renters covered through the executive order must meet four criteria.

In March, the Biden administration extended a federal moratorium on evictions of tenants who have fallen behind on rent during the coronavirus pandemic. The moratorium was extended through the end of June.

RELATED: NY, other states struggling to get federal rent relief to tenants

The ban, initially put in place last year, provides protection for renters out of concern that having families who lost their homes and move into shelters or share crowded conditions with relatives or friends during the pandemic would further spread the highly contagious virus, which has killed more than 578,000 people in the United States.

To be eligible for the housing protection, renters must earn $198,000 annually or less for couples filing jointly, or $99,000 for single filers; demonstrate that they’ve sought government help to pay the rent; declare that they can’t pay because of COVID-19 hardships; and affirm they are likely to become homeless if evicted.

But avoiding eviction does not erase any rent owed. Estimates vary, but the Urban Institute said renters owe anywhere from $13.2 billion to $52.6 billion in back rent.

Landlords in several states have sued to scrap the order, arguing it was causing them financial hardship and infringing on their property rights. They remain opposed to any extension, saying it does nothing to address the financial challenges facing renters and landlords.

RELATED: Homes selling faster than ever even as prices rise to all-time highs

Some states have issued their own moratorium on evictions.

New York extended a state law that protects tenants and homeowners from eviction if they’ve faced economic hardship because of the coronavirus pandemic. The moratorium on evictions and foreclosures will run through August under a law the state’s governor signed Tuesday.

In January, California lawmakers voted to extend the eviction moratorium through June statewide and also gave the OK to distributing $2.6 billion in federal funding for rental housing assistance, according to KTVU.

An estimated 8.8 million Americans are behind on their rent, according to the Consumer Financial Protection Bureau. While relief efforts have staved off some of the housing crisis, rent is still going to come due.

The National Council of State Housing Agencies previously estimated the total overdue rent among Americans will fall between $25.2 billion and $34.3 billion by January 2021 because of the pandemic.