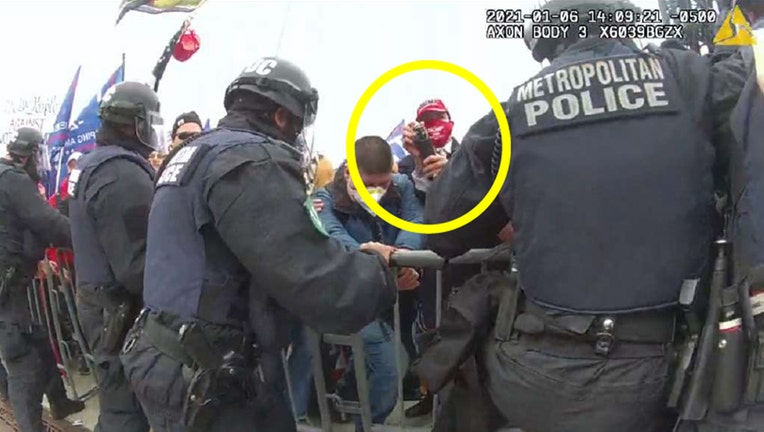 This image taken from a police body-worn camera video shows rioters and officers clashing outside the U.S. Capitol in Washington, D.C., on Jan. 6, 2021. The FBI says the man circled in yellow is Edward Francisco Rodriguez of Brooklyn, N.Y. (Metropoli

NEW YORK - Federal agents last week arrested a man from New York City for assaulting police officers during the riot at the U.S. Capitol in January.

The FBI believes that Edward Francisco Rodriguez, 26, of Brooklyn, is the rioter known by the hashtag #SuitMacer after a video went viral showing a man wearing a suit and mask spraying something on several police officers during the chaos, according to court documents from the U.S. Department of Justice.

Authorities charged Rodriguez with assaulting, resisting or impeding officers, engaging in physical violence on Capitol grounds, and more. He appeared in federal court in Downtown Brooklyn on Friday.

Authorities said that Rodriguez was part of a group of pro-Trump rioters who clashed with cops from the Capitol Police and the Metropolitan Police on a terrace area on west side of the U.S. Capitol. Rodriguez was wearing a dark-colored suit and carrying a white sign with "STOP THE STEAL" written in red lettering, according to federal prosecutors.

"As depicted in publicly available video, Rodriguez pointed a canister at visibly marked law enforcement officers manning a barricade and sprayed them with a chemical irritant before retreating back into the crowd," the Justice Department said in a news release. The video circulated online, where social media users referred to the assailant as '#SuitMacer,' who was later identified as Rodriguez."

Federal agents have arrested 535 people from all over the country in connection with the Jan. 6 Capitol insurrection and breach, according to the Justice Department. More than 165 people are accused of either assaulting or impeding law enforcement personnel. 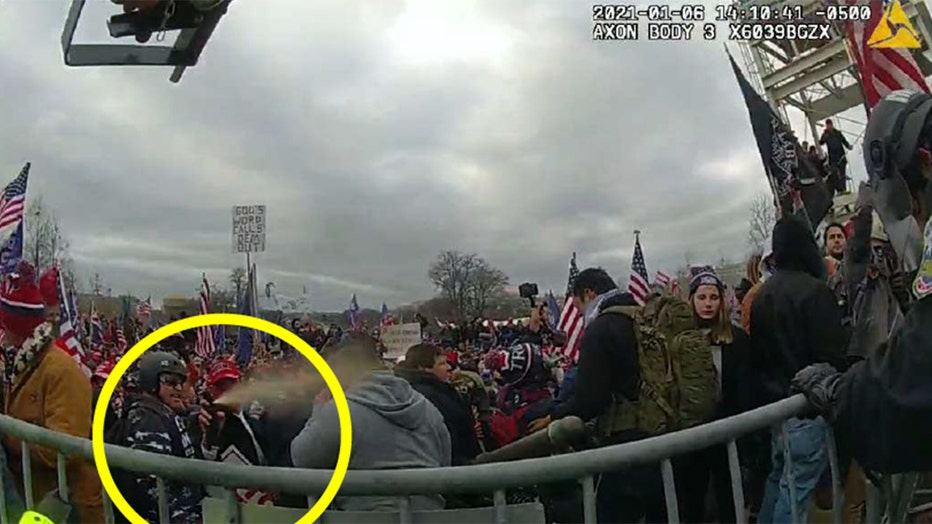 The FBI says the man circled in yellow, who sprayed a chemical on officers, is Edward Francisco Rodriguez of Brooklyn, N.Y. (Metropolitan Police Department via U.S. Justice Department)

Arrested and initial appearance on 7/9.