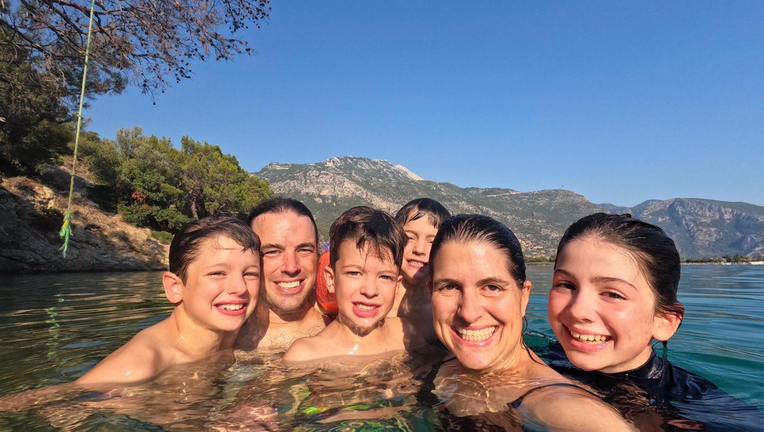 BALI, Indonesia - For Edith Lemay and her husband, Sebastien Pelletier, it’s a race against time to see as much of the world before their kids completely lose their vision.

The couple has four children: 11-year-old Mia, 9-year-old Leo, 7-year-old Colin and 5-year-old Laurent. All of them, except for Leo, were diagnosed with retinitis pigmentosa, a rare eye disease that leads to vision loss and blindness.

Lemay said she got the idea to travel after Mia was diagnosed with the disease four years ago. They took her to a specialist after she kept bumping into items. Lemay told the specialist she wanted her daughter to start learning braille, but the specialist advised against it, saying her daughter’s vision was still good at that point.

Her two youngest children also developed the same vision symptoms and were diagnosed with the same disease.

Photos from the family's journey around the globe.  (Edith Lemay)

Devastated with the diagnosis, Lemay said she had to think about re-building her children’s future.

"My way of coping with challenges is trying to find solutions," she told FOX Television Stations.

The specialist told Lemay to build up her children’s visual memory with books and other resources to develop a frame of reference for when they go blind.

"And then that’s when it clicked for me," Lemay continued. "I’m not going to do it in a book. I’m going to go see them for real and also show my kids how beautiful the world is."

The family, who lives in Quebec, Canada, started their journey in March 2022 after delaying the trip due to the COVID-19 pandemic. So far, they have made stops in various countries in Africa and Turkey, and they’re currently in Bali, Indonesia.

Lemay documents the family’s travel on her Facebook page.

She said the best part of the trip is how much the family bonded while experiencing different cultures. She was touched when one of her sons noticed the sunset.

"It was so crazy beautiful, even my son said it looked like a dream because it was so surreal," she continued.

"I’m not going to do it in a book. I’m going to go see them for real and also show my kids how beautiful the world is."

Lemay said she doesn’t know when the children will completely lose their eyesight but they already have trouble seeing during the night. She said her two youngest sons have yet to comprehend their diagnosis but her daughter seems to accept it.

"She’s really a practical girl," Lemay explained, saying her daughter told her "I’ll deal with the challenges when I face them."

Teen pilot wants to fly solo around the world

Mack Rutherford talks with FOX Television Stations about his hope of becoming the youngest pilot to fly solo around the world.

The family said they have no planned route around the globe. They don't stay in luxurious hotels but in more economical settings, living off their savings and shares her husband obtained through his employment.

They plan to return home in March 2023, but Lemay said building her children’s visual memory will continue, even at home.

"Beauty is everywhere around us...just make sure to give it some importance," she said.