U.S. Attorney General Merrick Garland announced on Thursday that the Department of Justice has filed a lawsuit to sue the state of Texas over its stringent abortion law, arguing that it was enacted "in open defiance of the Constitution."

AUSTIN, Texas (AP) - The Biden administration is suing Texas over a new state law that bans most abortions, arguing that it was enacted "in open defiance of the Constitution" and asking a judge to quickly declare the law invalid. The case filed Thursday by the Department of Justice is almost certainly destined to reach the Supreme Court, perhaps within a matter of weeks.

The high court has already been asked to weigh in on the law once. The justices voted 5-4 not to intervene to prevent it from taking effect, but they said further challenges were possible. 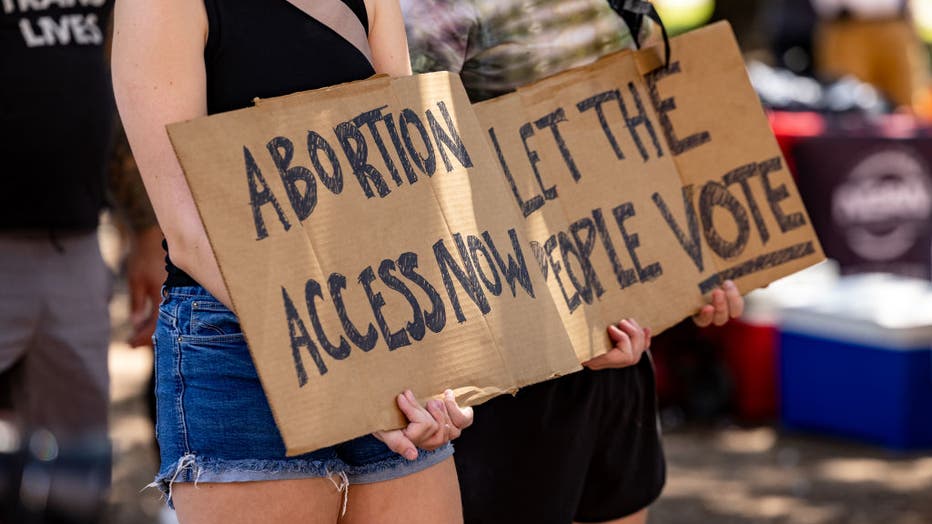 A woman carries a sign calling for access to abortion at a rally at the Texas State Capitol on Sept. 11, 2021 in Austin, Texas. (Photo by Jordan Vonderhaar/Getty Images)

Here are some questions and answers about the law and the case:

WHAT EXACTLY DOES TEXAS' LAW DO?

Texas' law, Senate Bill 8, prohibits abortions once medical professionals can detect cardiac activity, usually around six weeks. That's before some women know they’re pregnant. Courts have blocked other states from imposing similar restrictions, but Texas’ law is different because it leaves enforcement up to private citizens through civil lawsuits instead of criminal prosecutors. That novel wrinkle made the law hard to challenge before it went into effect.

The law allows any private citizen to sue Texas abortion providers who violate it, as well as anyone who assists a woman getting the procedure, including someone who just drives her to a clinic. Patients themselves, however, cannot be sued.

The law offers no exceptions in cases of rape or incent, which Republican Texas Gov. Greg Abbott has defended by falsely saying women still have "at least six weeks" to get an abortion. Six weeks of pregnancy does not mean a woman has six weeks to make a decision.

WHAT HAS BEEN THE IMPACT SO FAR?

Just the threat of being sued for violating the law has meant some abortion providers in Texas have stopped offering abortions altogether, even those before six weeks. Other providers have continued to offer abortions but only those that comply with the law. That means they've had to turn patients away who are further along in their pregnancies or try to get them assistance outside of the state. Clinics in neighboring Oklahoma, and in nearby Kansas, have reported an influx of patients from Texas.

At a Trust Women clinic this week in Oklahoma City, around two-thirds of patients were from Texas, spokesman Zack Gingrich-Gaylord said. And Texas patients accounted for half of the 40 appointments this week at another location farther away in Wichita, Kansas. Appointments are booked through September.

President Joe Biden is looking for ways to fight the new Texas abortion bill, saying it creates "almost a vigilante system" and went on to call it "almost un-American." The president, who is traveling to Louisiana to see the Hurricane Ida devastation, said he's asked the Justice Department to look into whether they can take any action to prevent the enforcement of the new law.

Texas Right to Life, a group that helped push the law and set up a tip line to receive information about potential violations, said they've received no credible information that anyone is violating the law.

WHAT DOES THE JUSTICE DEPARTMENT WANT?

The Justice Department wants a federal judge to declare the law invalid and prohibit its enforcement. That would allow clinics to return to the situation before the law took effect where they could provide abortions after the six-week mark.

The judge assigned to the case is Robert Pitman, who was appointed by President Barack Obama. Pitman got assigned the case because he had previously presided over a challenge to the law filed by abortion rights activists. That case was still at a preliminary stage when it was appealed and reached the Supreme Court. Pitman can be expected to rule quickly.

WHY DID THE JUSTICE DEPARTMENT GET INVOLVED?

Pressure had been mounting on the Justice Department from the White House and Democrats to take action in Texas. Attorney General Merrick Garland said the enforcement model in the Texas law could set a troubling precedent where states "empower any private individual to infringe on another’s constitutionally protected rights."

The model of Senate Bill 8 is essentially a massive scale up of local abortion bans that began popping up in small Texas cities starting in 2019. But those bans had little immediate impact in most places that passed them because most weren't cities with abortion providers. Other Republican-led statehouses are already moving to follow Texas’ lead.

The lawsuit marks the most aggressive involvement by the Justice Department during a decade of Texas passing increasingly strict anti-abortion measures. The most sweeping one in 2013 — which put stringent regulations on Texas abortion clinics — was ultimately overturned by the Supreme Court. But not before more than half of Texas’ 40-plus abortion clinics wound up shuttering. Today, the state has roughly two dozen clinics.

WHEN WILL THE PUBLIC KNOW WHETHER THE TEXAS LAW CAN STAND?

Pitman is far from the last word on the law. The case can be appealed to the U.S. Court of Appeals for the 5th Circuit, where a three-judge panel would weigh in, and then on to the Supreme Court. The case could move quickly, possibly reaching the Supreme Court within weeks.

In the previous challenge to the law before Pitman, the appeals court halted proceedings before he could decide whether the law should be barred from taking effect. The Supreme Court, for its part, declined to disturb the appeals court’s actions.

The high court, where conservatives hold a 6-3 majority, already planned to tackle the issue of abortion when the justices return from their summer break and begin hearing cases again in October. The court had previously agreed to hear a case out of Mississippi in which the state is asking to be allowed to ban most abortions at the 15th week of pregnancy. That ban looks modest by comparison to the Texas law.

HAS THE LAWSUIT HAD AN IMPACT?

Abortion rights groups have been among those cheering the Biden administration's decision to step in, but the filing of the lawsuit hasn't changed anything on the ground. Without any additional court action at this point, the law remains in effect.