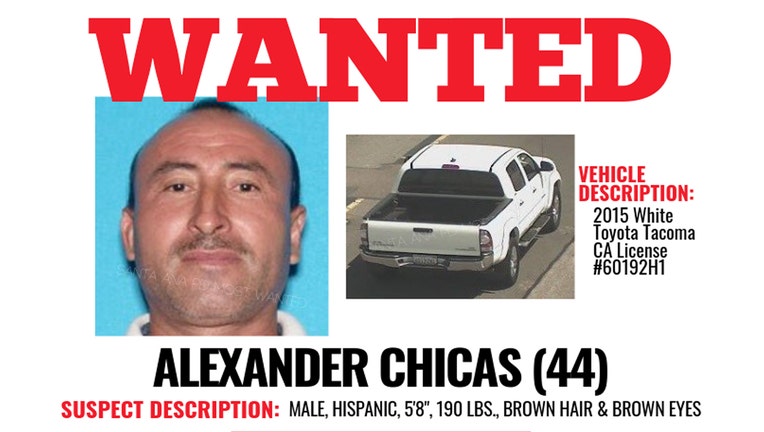 SANTA ANA, Calif. - Santa Ana police asked for the public's help on Wednesday in tracking down a man charged with slashing the face of his ex-girlfriend.

The woman had her bedroom window open because of the heat, "so he ripped the screen off and forced his way in and told her he would kill her" before he slashed her face with a knife, Bertagna alleged.

The victim's screams drew the attention of her teenage son, which prompted the intruder to flee, according to Bertagna.

The estranged couple had been together "for many years" and had recently broke up, he said.

"He had assaulted her previously so she dumped him," Bertagna alleged.

Chicas was charged Tuesday with attempted murder with a sentencing enhancement allegation of attempted premeditated murder. He was also charged in an arrest warrant with assault with a deadly weapon, burglary, criminal threats and stalking, all felonies, as well as misdemeanor domestic battery, and also faces sentencing enhancement allegations of the personal use of a deadly weaponand causing great bodily injury to the victim.

Chicas is 5-foot-8 and 190 pounds, with brown hair and eyes. He was seen fleeing in a white 2015 Toyota Tacoma, license plate number 60192H1. He rents a room in the area of Bristol Street and McFadden Avenue, Bertagna said.

Anyone who knows his whereabouts was asked to call detectives at 714- 245-8660 or send an email to apartida@santa-ana.org.