Elizabeth Holmes, the ex-CEO of Theranos, was sentenced to 11.25 years in federal prison. She was convicted of fraud and conspiracy after misleading investors about her blood-testing startup company.

Holmes will self-surrender on April 27, which likely allows her to complete her pregnancy.

The sentence imposed by U.S. District Court Judge Edward Davila marks the end of a momentous fall from grace for the one-time darling of Silicon Valley, who was once deemed the youngest and richest self-made female billionaire in the world. Prosecutors had asked for 15 years; her legal team had asked for 18 months of home confinement.

"There are so many things I would do differently if I had the chance," Holmes said before hearing the judge's sentence. "I tried to realize my dream too quickly."

At times, she wept in court.

"I stand before you taking responsibility for Theranos," she said through tears. "I loved Theranos. It was my life's work." 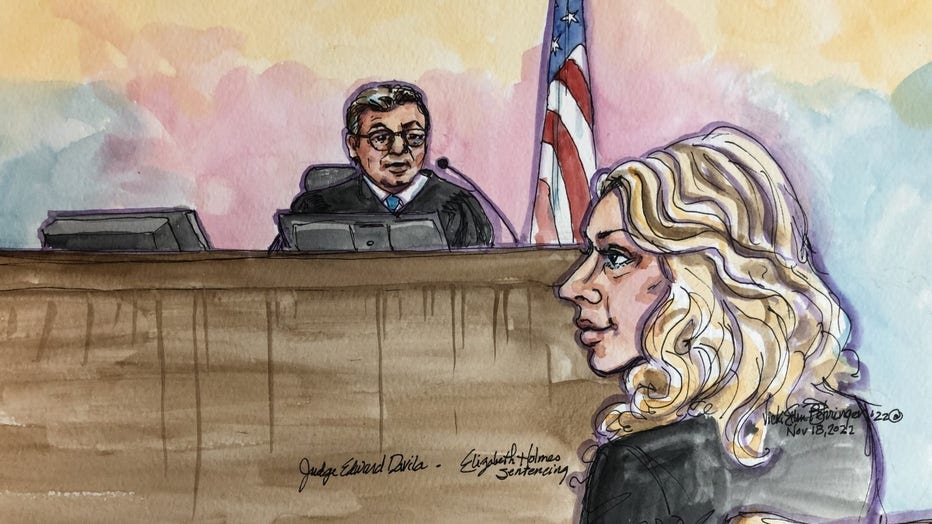 Elizabeth Holmes was sentenced to 11.25 years in federal prison for fraud, stemming from the way she ran Theranos. Drawing by Vicki Behringer.

Holmes was convicted in January of three counts of fraud and one count of conspiracy for swindling investors out of $144 million.

Before being indicted, Holmes positioned herself as the next Steve Jobs, seeking to disrupt the biotech industry with her blood-testing company Theranos.

But while she received fame and adulation following her claims that her technology could perform hundreds of tests with a single drop of blood, the reality was much different.

Holmes passed those documents to investors, telling them her analyzers were being used by the U.S. military, when they never were.

Davila, the judge, lamented that Holmes' obvious talents were misspent.

"Was there a loss of a moral compass here?" Davila asked in court, pondering Holmes' motivation. "The tragedy of this case is Ms. Holmes is brilliant."

Holmes and her partner Sunny Balwani partnered with Safeway before Theranos cut a deal with Walgreens and began testing patients' blood at locations in Arizona and California before their secrets were exposed by the Wall Street Journal in 2015.

Balwani was separately convicted of 12 counts fraud earlier this year. He's set to be sentenced in December.

Evan Sernoffsky is an investigative reporter for KTVU. Email Evan at evan.sernoffsky@fox.com and follow him on Twitter @EvanSernoffsky