Fireworks were aimed at police vehicles during protests against new coronavirus measures, which took place on Bastille Day, July 14, in Paris and other French cities. (Credit: Nicolas Mercier via Storyful)

PARIS (AP) - With "Welcome" messages in multiple languages, the Eiffel Tower greeted tourists Friday for the first time in nearly nine months, reopening to the public even as France introduces new virus rules aimed at taming the fast-spreading delta variant.

Smiles were broad and emotions palpable as the first masked visitors mounted the elevators heading to the top of the Paris monument.

"It’s such a lovely place and wonderful people...and now the wonderful Tour Eiffel," German tourist Ila Mires said, using the French name for the tower. She came with her 19-year-old daughter before the young woman leaves for studies in Amsterdam. Seeing the tower on their last day together in Paris "is such a gift to mother and daughter," Mires said.

The "Iron Lady" of Paris was ordered shut in October as France battled its second virus surge of the pandemic, and remained shut for renovations even after other French tourist draws reopened last month. 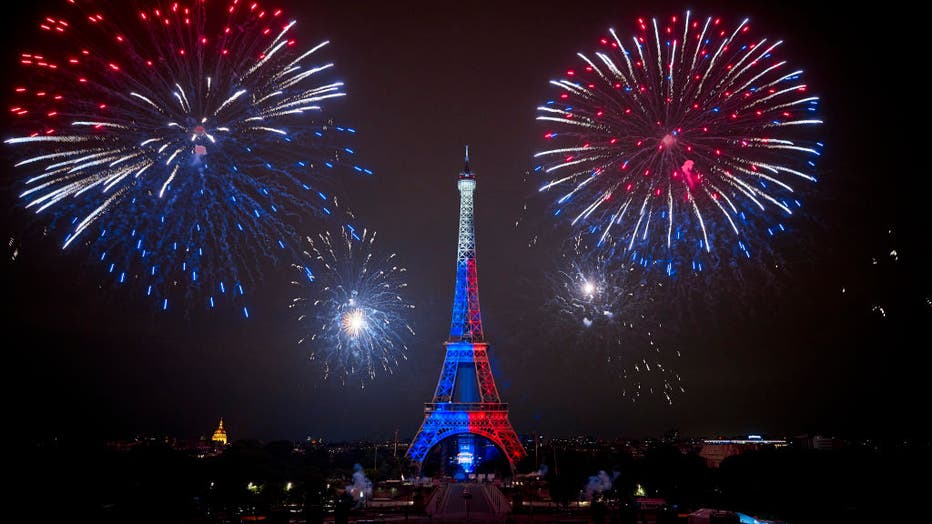 Fireworks light up the Eiffel Tower as part the annual Bastille Day Celebrations on July 14, 2021 in Paris, France. (Photo by Kiran Ridley/Getty Images)

The tower’s reopening came four days after President Emmanuel Macron announced new measures aimed at warding off a fourth surge, including mandatory vaccinations for health workers and mandatory COVID-19 passes to enter restaurants and tourist and other venues.

Starting Wednesday, all visitors to the Eiffel Tower over age 18 will need to show a pass proving they’ve been fully vaccinated, had a negative virus test or recently recovered from COVID-19.

Masks are required, and the number of daily visitors to the tower will be limited to about half the pre-pandemic norm of 25,000.

The rules didn’t seem to scare crowds away on Friday.

"Bienvenue - Welcome - Wilkommen - Bienvenido" flashed on a screen as families, couples and groups lined up or posed for photos beneath the tower.

"Before COVID, it was 80% foreigners, 20% French. Last year, it was 80% French, 20% foreigners. And this year, it’s amazing because it’s fifty-fifty. And for us, it’s the time that foreigners are coming back to the Eiffel Tower," he said.

France has opened to international tourists this summer, but the rules vary depending on which country they are coming from. While visitors are trickling back to Paris, their numbers have been far from normal levels, given continued border restrictions and virus risks.

Looking over the elegant French capital, Philippe Duval of Bordeaux and his family admired the view.

"It’s an event we didn’t want to miss," said Duval, who was among the first to make it to the tower’s top-floor viewing deck. "To be on top of the world’s most beautiful city, what else can you ask for."