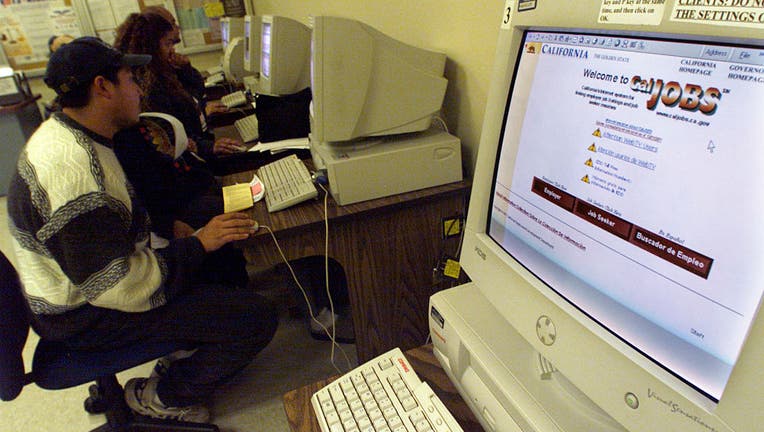 Job and benefits seekers in the EDD office using the computer terminals to seek jobs and benefits in the 9th st. office in LA. downtown. (Photo by Lawrence K. Ho/Los Angeles Times via Getty Images)

OAKLAND, Calif. - A group of California advocates are claiming victory after reaching a settlement with the Employment Development Department over providing more language services to non-English speakers.

As a result, the EDD will have to provide real-time translation services through qualified interpreters or call the claimant back within five days with the proper interpreter and expand phone lines to the top seven non-English languages in California by the end of 2022, requiring that Korean, Tagalog and Armenian interpreters be added to the Spanish, Mandarin, Cantonese and Vietnamese phone lines that already exist.

Also, online access must be improved through multilingual access portals in the top seven non-English languages by 2024.

In addition, the Legislature has granted $21 million over two years to enhance multilingual services at the EDD.

The terms are supposed to help people like Gregorio Sanchez, who lives in Kern County and was a client of the California Rural Legal Assistance. He speaks a language called Mixteco and had many problems understanding what to do especially since he does not use smartphone or computers.

"Each time that I want to open my benefits claim, I go to someone to help me and that person charges me each time that I go to them for help," Sanchez said in a statement provided by the advocates.

The EDD on its website said it is "fully committed" to ensuring that everyone has access to language services and provided a complaint form if anyone feels as though they have been denied.

"We applaud EDD’s willingness to make their processes more equitable for all California workers, regardless of the languages they use," Joann Lee, special counsel on language justice at LAFLA, said in a statement. "This settlement holds EDD more accountable to the needs of our state’s diverse cultures and communities. EDD was not alone as many state and local agencies’ language access practices fall sorely short of what is required. As a state, California can and should do better."

California is one of the most linguistically diverse states in the nation. Almost half of residents speak a language other than English at home, and 7 million people primarily use one of more than 200 non-English languages. While Spanish is the most common, constituting approximately 64%, roughly 2.4 million residents with limited English proficiency use languages other than Spanish.

Throughout the pandemic, claimants trying to access critical unemployment benefits have faced a range of barriers and setbacks — at one point, only a small percentage were able to speak with a representative — while trying to put food on the table and keep their families afloat, according to the advocates.

Throughout the pandemic, countless people reported not being able to get through to EDD phone lines; some even resorted to hiring robots to make calls for them.

And then if a non-English speaker actually got through, the advocates said that often, they were unable to communicate with their EDD agent.

Some ended up paying for services from what advocates described as "predatory third-party brokers or notarios" to file their claims and still often could not ultimately navigate the process and secure benefits.

Mike Bernick, an employment attorney with Duane Morris LLP in San Francisco who used to be head of the EDD, said that he thinks this arrangement might actually work out for all claimants.

That's not because the agency has necessarily worked out all its kinks, but because the number of unemployment claims has gone drastically down since the pandemic began two years ago.

"Their response has gotten a lot better," Bernick said of the EDD. "The phone system will work itself out because the claims are continuing to decline."

The EDD must now also collect and share data on claimants using its language services so advocates can monitor how well the system is working. The agency will create a multilingual access unit and establish an advisory committee of community members on language access.

The agreement also applies to outside EDD vendors, Lee said, notably ID.me, which verifies claimants’ identities, and Bank of America, which issues the debit cards for paying benefits.