The Los Angeles Lakers star posted an image on Instagram in reference to Colin Kaepernick, who famously kneeled during the national anthem in protest of police brutality and racial injustice.

LOS ANGELES - NBA superstar LeBron James spoke out following the death of George Floyd, an unarmed black man who died this week in police custody after pleading with Minneapolis officers that he could not breathe while being detained.

James posted an image on his Instagram showing an officer kneeling on Floyd, alongside a picture of former San Francisco 49ers quarterback Colin Kaepernick kneeling before a game. The picture reads, “This… …Is Why.”

“Do you understand NOW!!??!!?? Or is it still blurred to you?? #StayWoke,” the Los Angeles Lakers player added in the caption of his post.

Kaepernick famously helped start a wave of protests about police brutality and racial injustice in 2016 by kneeling during the national anthem at NFL games.

Floyd’s death on Monday is under investigation by the FBI and state law enforcement authorities. Four Minneapolis police officers were fired for their involvement after a bystander’s video of the incident went viral on social media.

The video shows a white officer, later identified as Derek Chauvin, kneeling on Floyd’s neck, ignoring his pleas. “Please, please, please, I can’t breathe. Please, man,” said Floyd, who had his face against the pavement.

Floyd also moans in the video. One of the officers tells him to “relax.” The man calls for his mother and says: “My stomach hurts, my neck hurts, everything hurts ... I can't breathe.” As bystanders shout their concern, one officer says, “He's talking, so he's breathing.”

But Floyd stops talking and slowly becomes motionless under the officer's restraint. The officer does not remove his knee until Floyd is loaded onto a gurney by paramedics. He later died at a hospital.

Police said the man matched the description of a suspect in a forgery case at a grocery store, and that he resisted arrest. The bystander video shows the moments that followed.

The mayor of Minneapolis called for criminal charges to be filed against Chauvin.

“I've wrestled with, more than anything else over the last 36 hours, one fundamental question: Why is the man who killed George Floyd not in jail?” said Minneapolis Mayor Jacob Frey. 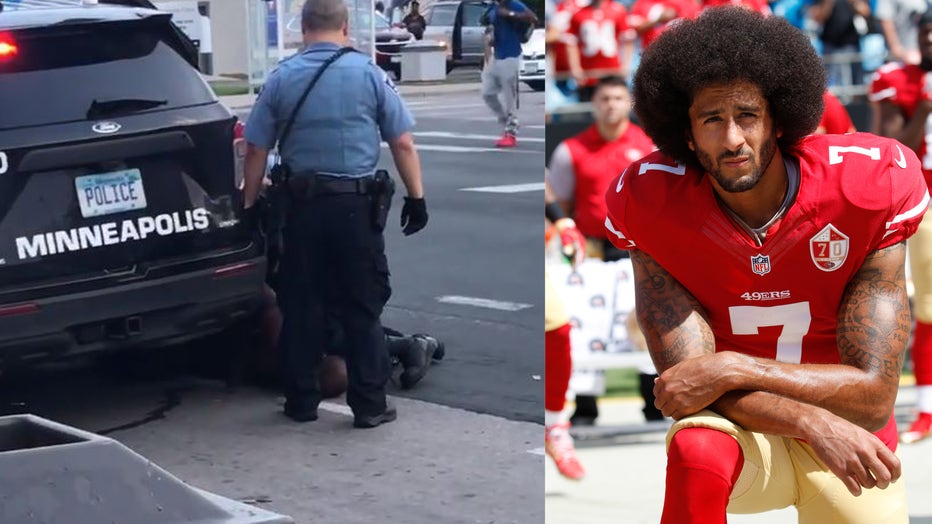 A screengrab of a bystander’s video of the incident that was shared widely on social media following George Floyd’s death, alongside Colin Kaepernick as a San Francisco 49er kneeling during the national anthem prior to a game against the Carolina Pan

“Worlds honestly sickening. It really is..... no explanation,” he wrote on Twitter.

UFC star Jon Jones said: “There needs to be a nationwide policy change. When a man is in handcuffs and is screaming that he cannot breathe. Get the f--- off his chest and or neck. If you can’t hold a man who is in handcuffs down by his feet you’re a p---- and probably shouldn’t be wearing that badge.”