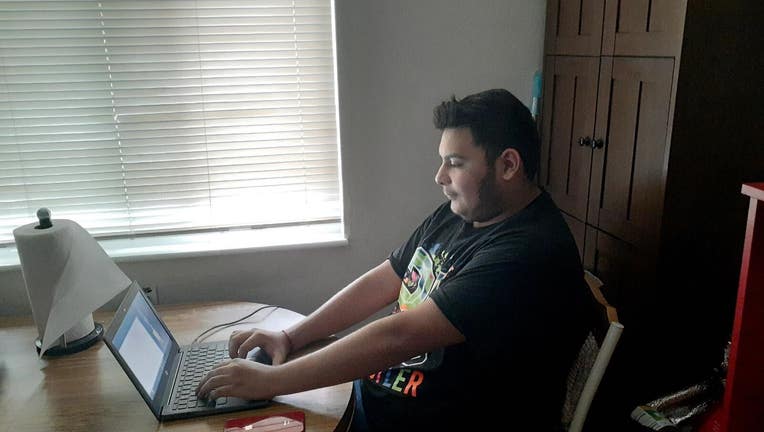 Luis Rodriguez, 15, and his three siblings, ages 12, 10 and 7, attend "school" every day in their two-bedroom San Leandro apartment.

OAKLAND, Calif. - Luis Rodriguez, 15, and his three siblings, ages 12, 10 and 7, attend "school" every day in their two-bedroom apartment, listening to lessons and trying desperately not to get booted off their outdated Chromebooks.

"To be honest, I mostly can't hear my teachers, and my computer glitches or I just lag out of Zoom," the sophomore said of his lessons at San Leandro High.

Once, in English class, he said his WiFi went out for most of the lesson.

"I was freaking out," he said. "I was going crazy. I missed most of the test."

As for learning next to his brothers and sister?

His mom, Cathy Rodriguez, posted on the nonprofit Tech Exchange's Facebook page in the hopes of scoring brand-new Chromebooks for her four children. She's a caregiver; her husband is a painter. She said they simply can't afford higher quality computers for their kids without some financial help.

"They never responded," she said of the group.

As Californians look to school, some families form 'pandemic pods;' others struggle for WiFi

The Rodriguez family's school challenges are among the many and varied issues California's six million public school children are facing during this unprecedented remote learning mandate because of the coronavirus pandemic. Two months into distance learning, students, parents, teachers and administrators are reporting a mixed bag: Sure it's nice to sleep in and do math problems in comfy clothes. But there are a host of other problems, like a lack of technology and even textbooks making virtual learning more difficult, especially for those at the lower end of the socioeconomic rung.

School districts are trying, though.

KTVU surveyed the Bay Area's three largest districts to see just how many computers they had handed out so far. San Francisco said it distributed 19,600 devices and over 6,100 hotspots to its  61,000 students. San Jose Unified said it distributed $5.1 million worth of 20,000 iPads and Chromebooks, plus more than 6,000 hotspots to its 30,000 students.

The Oakland Undivided program has 33,000 new laptops on order for public schools students who qualify. Many are still waiting and are using old loaners that aren't quite cutting it when it comes to speed.

Oakland Unified said it delivered 2,800 Chromebooks and 2,150 hotspots to its 50,000 students - roughly 10% of its entire population. District spokesman John Sasaki said there are another 9,940 Chromebooks and 4,850 hotspots ready for distribution, including to students at the district's charter schools.

"Unfortunately, due to the fires and air pollution, technology distribution events were largely postponed across the city of Oakland delaying distribution efforts," he said.

For now, Oakland students are using the 20,000 old Chromebooks distributed at the end of spring. 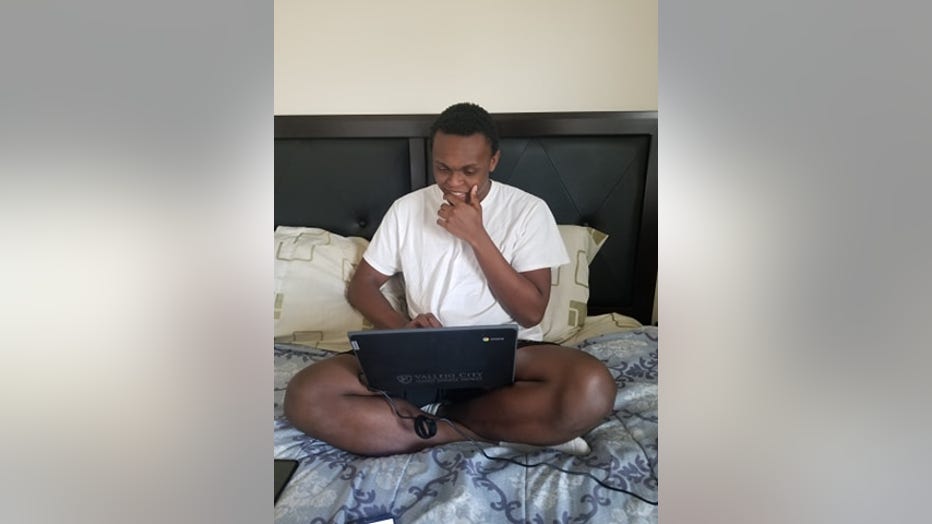 Lawrence Hargraves II, a senior at Jesse Bethel High School, attends his first day of school in front of his laptop on his bed. Aug. 17, 2020

But it's not just computers, or lack thereof, that is making the school-at-home an educational issue.

Mayra Alvarado, a 5th-grade Spanish teacher at Manzanita Elementary School in Oakland, said until last week, she had been waiting for certain textbooks and workbooks to arrive as well.

"We got part of the shipment. But we still don't have all of them," Alvarado said. "It's always a problem. But it's worse this year."

That said, Alvardo admitted the tech gap is still a problem for her students. She estimated 30% of her students still don't have the proper equipment or connectivity for class. "Some don't have anything. Some call in through the phone. Some just picked some up at our supply distribution the other day," she said.

And then there is a language barrier. She estimates about 10% of her students are Guatemalan and speak Mam. The remote learning plan requires that a translator help out with lessons and communications to parents. But because she is not at school, Alvarado is perplexed on how to get that service.

"I have no idea how to request a translator for them," Alvarado said. 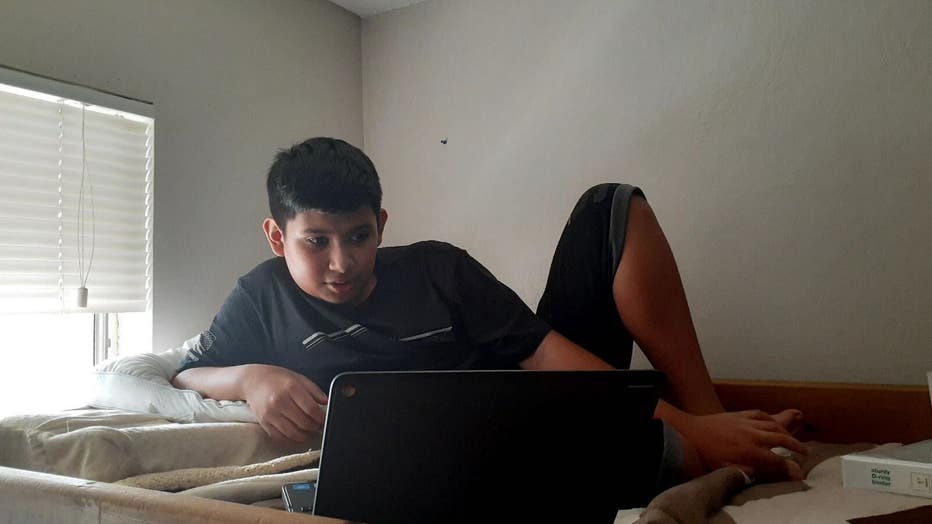 Nathan Rodriguez studies on a bunk bed in his San Leandro apartment.

Classwork, communication daunting for million California students with no computers

But it's not all bad. Some things are pretty similar to how it would be if Alvarado were teaching in her physical classroom.

"I love my students," she said. "They are really, really sweet."

She also added that the families are very understanding and supportive, "given all the issues."

Lawrence Hargraves II, a senior at Jesse Bethel High School in Vallejo, is also very understanding of the situation.

In fact, he's delved in full force into his academic studies, taking classes with Upward Bound and at a community college to further his education.

He doesn't mind that everything is taught online.

"The teachers are doing a great job," he said.

And he said he really enjoys being able to sleep in more and rest. He said he also really loves spending time with his family. Now, that they're all home together, he doesn't have to miss his parents when they're at work.

Sure, he would love to hang out with his friends, run track and play football. But overall, Lawrence said he would give distance learning a "9 out of 10." 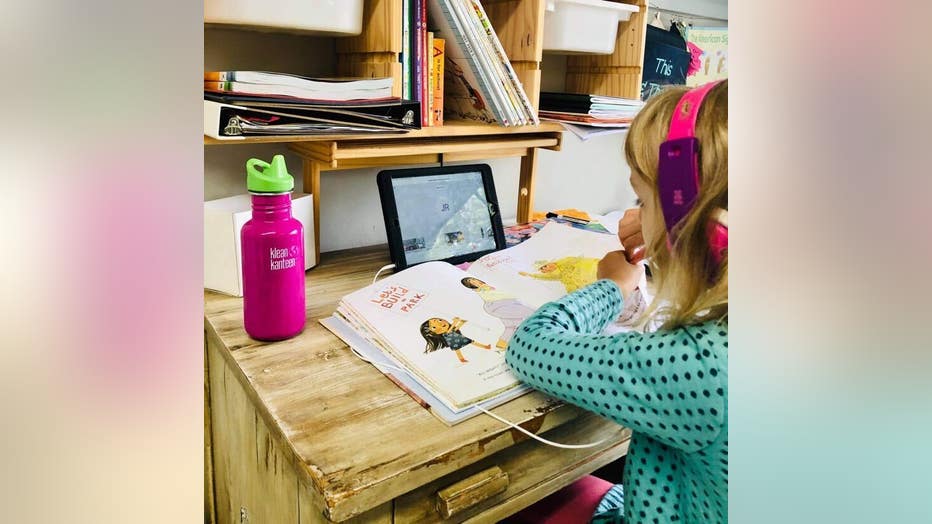 Natalie Mathison said she let her 6-year-old decide how she wanted to set up her room for school.

Natalie Mathison and her 1st-grade daughter at Booksin Elementary School in San Jose are also adjusting without too much complaint to the new way of living and learning.

Mathison said she let her 6-year-old decide how she wanted to set up her room for school, and that "gave her ownership of her sense of space."

As for their family, Mathison said they've all learned to adapt and set new expectations. Those who do, she said, will excel.

For instance, she's not that hung up on how much homework her daughter actually does because everything seems to be a lesson on life these days. And when in-person class resumes, she's hoping that schools will alter the five-day-a-week model to perhaps include "off" days, where classes are held outside or at a museum.

"We're not going back to the way things used to be," she said. "And people need to get used to that."

Lisa Fernandez is a reporter for KTVU. Email Lisa at lisa.fernandez@foxtv.com or call her at (510) 874-0139. Or follow her on Twitter @ljfernandez.