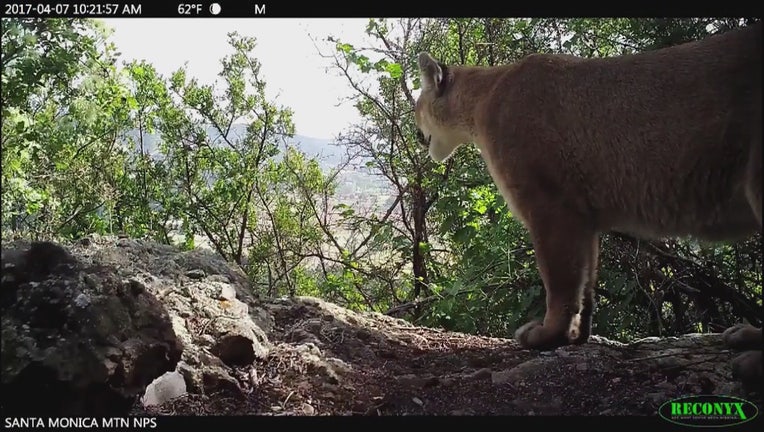 SANTA MONICA, Calif. - The executive director of the Santa Monica Mountains Conservancy said in remarks published Tuesday that he's willing to take matters into his own hands and spend his own money to prevent the death of the last remaining male mountain lion in the area after a young mountain lion that attacked a dozen animals over two years was legally killed by the landowner whose livestock had been attacked.

The executive director of the Santa Monica Mountains Conservancy is willing to spend his own money to save the last remaining male mountain lion.

A young mountain lion monitored by the National Park Service since 2017 was killed last month near Camarillo, the first to be killed in the Santa Monica Mountains under a California law that allows a landowner to take lethal action against a big cat that has killed or injured livestock or pets if other deterrents have failed, it was announced Monday. Known as P-56, the mountain lion was living south of the 101 Freeway in the western area of the Santa Monica Mountains.

Mountain lion hunting has been banned in California since 1990. An exception to the law, created in 2014, allows lions that have killed a pet or livestock to be put down. In those instances, a property owner may request a depredation permit from the California Department of Fish and Wildlife. In the Santa Monica and Santa Ana mountains, where the mountain lion population is isolated and at risk, an individual must allow for a ``three-strike'' policy, which went into effect in 2017, before taking action.

In the case of P-56, a property owner in the Camarillo area reported nine attacks over two years, resulting in the loss of 12 animals, mostly sheep and a few lambs. Before the mountain lion' death in late January, the Department of Fish and Wildlife said the landowner tried to keep the lion from the animals, including by penning livestock close to a barn and house, using trained guard dogs, putting up hot-wire fencing and using motion-activated lights and audio frequencies. P-56's most recent attack was just a day or so before he was killed, according to the California Department of Fish and Wildlife.

"The loss of a breeding male is a concern for the study, especially when the population is already very small," said Jeff Sikich, the lead field biologist for the mountain lion research project. "There are always animals out there that are not being tracked. Currently, there is only one adult male in the Santa Monica Mountains that we are tracking and that is P-63," who was caught and collared in February 2018, Sikich said, according to The Times.

Seemingly even more upset was Joseph T. Edmiston, the 40-year executive director of the Santa Monica Mountains Conservancy. He said he's willing to circumvent bureaucratic processes to take matters into his own hands to prevent the death of the last remaining male mountain lion in the area.

"I've worked for 40 years. To see one of the last two breathing mountain lion males shot for 12 sheep is so egregious. I will spend my own personal money so that doesn't happen again."

Edmiston said he fears what will happen if P-63 gets hungry near an area where livestock roam.

If that happens, Edmiston is asking that any affected individual who loses an animal to a lion to contact him directly for monetary reimbursement, rather than going to the California Department of Fish and Wildlife for a depredation permit that would allow a mountain lion to be killed. He is also asking the conservancy*s board to ask the state Legislature to appropriately amend the law and establish an indemnity fund.

"My personal email is jtedmiston@gmail.com. Email me," he said, according to The Times.