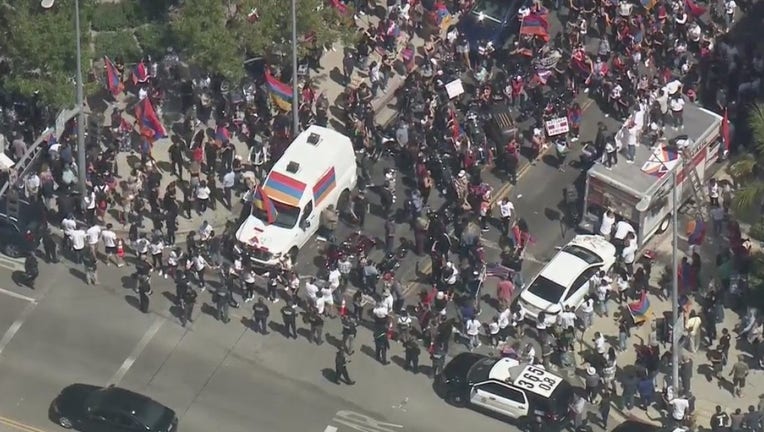 LOS ANGELES - Los Angeles is home to the largest Armenian community outside of Armenia. Each year on April 24 in commemoration of the Armenian Genocide, thousands take to the streets in a massive march.  Now, large crowds are gathering to bring awareness to what’s happening halfway around the world between Armenia and Azerbaijan.

A protest was planned in West Los Angeles on Tuesday. Demonstrators were asked to wear face-coverings. 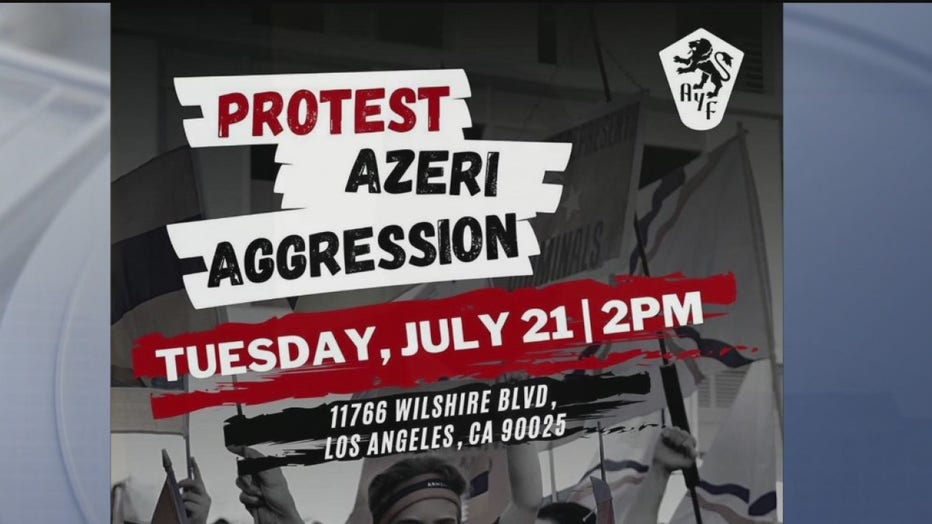 To understand what’s happening currently, one has to go back in history.

The conflict goes back many years, during the Soviet Era.

In the 1920s, Joseph Stalin redrew the USSR map and gave the region of Nagorno – Karabakh, or Artsakh as Armenians call it, to Soviet Azerbaijan, despite the fact that the overwhelming majority of the people living in that region were Armenian.

Large crowds are gathering to bring awareness to what’s happening halfway around the world between Armenia and the country of Azerbaijan.

From 1991 to 1994, there was full-scale warfare, between Azerbaijan and Nagorno-Karabakh, which resulted in thousands of lives lost on both sides.

A ceasefire was declared in 1994, which left ethnic Armenians in control of Nagorno-Karabakh. 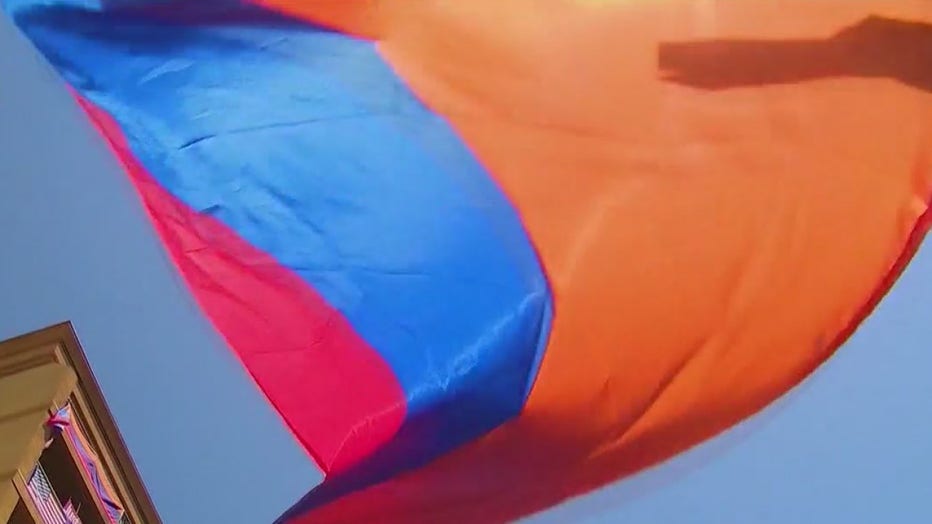 Over the years many skirmishes have broken out, the deadliest being in April 2016.

Now fast forward to July 12 northwest of the disputed territory.

“The latest was a manifestation of Azerbaijani claims against Artsakh and Armenia, they decided to take the opportunity of a global pandemic, attentions are somewhere else and they wanted to take advantage of a situation and capture land from Armenia. Which they failed at,” said Armen Sahakyan, Executive Director of the Armenian National Committee of America West Region. 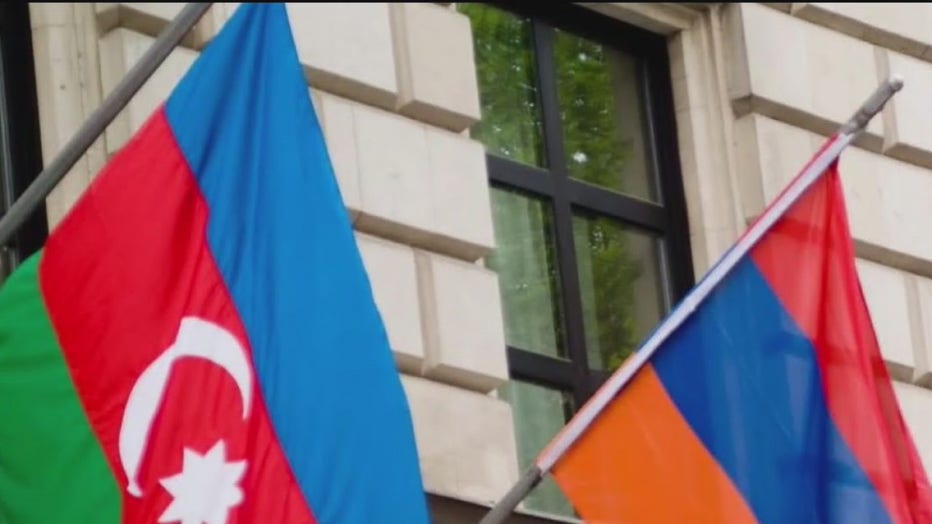 Azerbaijan claims the opposite happened.

A statement released by the consul general says in part:

“The Armenian army attacked...now instead of apologizing for the crimes against humanity committed by Armenia.... anyone who has some conscious should think twice before supporting Armenia.”

The Armenian community is getting support and a lot of it.

Not only from the huge Armenian diaspora dispersed all around the world, but also from a number of Armenian celebrities who are speaking out against Azerbaijan and asking for #supportarmenia.

Local lawmakers, including Los Angeles Mayor Eric Garcetti, has also tweeted about it.

On a national level, a growing list of lawmakers continue to condemn what they call Azerbaijan's “path of violence instead of the peaceful negotiated process spearheaded by the OSCE Minsk Group.”

On Monday night, The U.S. House passed the Pallone Amendment, requiring a closer Congressional oversight of a U.S. military aid program under which Azerbaijan has received more than $100 million.

So, why should you care?

Well, it comes down to this:

"If this conflict blows into a full-scale war it will engage the audience as I mentioned. Russia, Iran, Turkey, U.S. and other major powers that have vested interest. This can very quickly spin out of control — not to mention the recent threats made by Azerbaijan to strike the nuclear power station which can have absolutely catastrophic consequences in the region if not the entire world. Everyone needs to pay close attention. Things can get out of control very quickly,” Sahakyan added.

"Starting on July 12, the Armenian army attacked, with heavy artillery, the positions of Azerbaijan’s armed forces along the Armenia-Azerbaijan border, killing 11 Azerbaijani soldiers and a civilian, a 76-year old-disabled man. It has become clear that the objective behind this new military operation, which is the most violent breach of the ceasefire regime in years, has been to seize strategic positions in Azerbaijan. During the whole week, Armenia has been shelling residential areas in Azerbaijan, endangering Azerbaijani civilians and damaging their property.

In a statement, Armenia’s Minister of Defense Davit Tonoyan threatened Azerbaijan with the invasion of “new advantageous positions.” This follows on the heels of Tonoyan’s other statement a year earlier in which he announced that Armenia would invade ”new territories in the event of a new war” with Azerbaijan.

The facts of the Armenia-Azerbaijan conflict are crystal clear: In the early 1990s, Armenia invaded around 20 percent of Azerbaijan’s sovereign territory, expelling over 800,000 Azerbaijani civilians from their ancestral lands in the Nagorno-Karabakh region and seven surrounding districts. Coupled with 250,000 Azerbaijanis expelled from Armenia, Azerbaijan has over 1 million refugees and internally displaced persons (IDPs), which makes Azerbaijan a country with one of the largest populations of forcibly displaced people in the world.

Now instead of apologizing for the crimes against humanity committed by Armenia, the local Armenian special interests are protesting against Azerbaijan. Anyone who has some conscience should think twice before supporting Armenia that has displaced 1 MILLION Azerbaijanis from their homes and lands and committed massacres against Azerbaijani civilians murdering even children and women, like the Khojaly Massacre of 1992."

Statement by the Consulate General of Armenia in Los Angeles:

"On July 12, the Azerbaijani Armed Forces crossed the Armenia’s state border in the direction of Tavush province and moved towards the Armenian military position close to Movses village. This attempt was suppressed by the Armenian side. On the same day Azerbaijan started combining its attacks on military targets with assaults on settlements and civilian infrastructures of the Tavush province of Armenia. Chinary and Aygepar villages were shelled."

In light of the universal rules for the prevention and fight against the COVID-19 global pandemic, the intentional nature of the Azerbaijani armed forces to injure the civilian population, their health, life, and the property is even more striking. Azerbaijan bombed a PPE mask factory in Armenia’s Tavush region putting innocent lives at risk of COVID-19. Pandemic-related movement restrictions make access to goods and services of a humanitarian nature, such as medical supplies, essential to the survival of the population.

With no gain in the battlefield, the Azerbaijani military units began shelling the villages of Movses and Aygepar deliberately targeting the civilian infrastructures and the population. As a result, the shootings caused significant damages to civilian settlements, schools and administrative buildings. The large-scale military offensive unleashed by Azerbaijan starting from July 12 is not only violation of the Ceasefire Agreement, signed in 1994, and the Trilateral Agreement on the consolidation of ceasefire regime of 1995, but also gross violation of the binding principles of the International Humanitarian Law (IHL).

The Armenian Armed Forces never deliberately targeted or fired in the direction of any Azerbaijani settlement. At the same time, artillery units of Azerbaijan were positioned either within or in close proximity to civilian settlements, which made those settlements vulnerable.

Moreover, the Ministry of Defense of Azerbaijan announced its intention to strike the Metsamor nuclear power plant. This blatantly contradicts IHL norms in general and the Article 56 of the First Additional Protocol to Geneva Conventions prohibiting attacks on installations containing dangerous forces, which may cause the release of dangerous forces and consequent severe losses among the civilian population as well as the Geneva Declaration on Terrorism adopted in 1987 by the Geneva Conference on Terrorism, which recorded that state terrorism manifests itself in “the armed attack by the military forces of a state on targets that put at risk the civilian population residing in another state”. Such threats are an explicit demonstration of state terrorism and genocidal intent of Azerbaijan.

We also are deeply concerned about Turkey's attempt to undermine regional stability. The Minister of Defence of Turkey, Minister of Foreign Affairs and later President Erdogan himself expressed their support and readiness to assist Azerbaijan in any way and manner.

We would like to reiterate that Armenia remains fully committed to upholding peace and stability in the region."