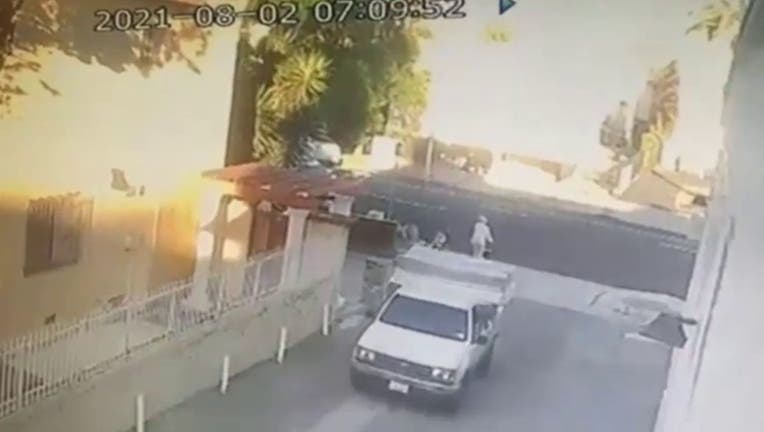 LOS ANGELES (CNS) - Police on Tuesday sought public help to find the hit-and-run motorist responsible for fatally injuring a 91-year-old woman who was walking in an alley in the University Park area near USC.

The pedestrian was hit by a pickup truck that was backing up near Ellendale Place and Adams Boulevard about 7 a.m. Monday, according to the Los Angeles Police Department.

Authorities withheld the name of the woman, who died at a hospital, pending notification of her relatives.

The woman was hit by the truck while the motorist was "traveling westbound in the alley, backing unsafely," according to an LAPD statement.

WARNING: The video below is very graphic and can be triggering for some viewers.

Deadly hit and run: Suspect runs over 91-year-old woman, drives away after

Authorities are searching for the suspect in the hit-and-run crash that killed a 91-year-old woman.

Investigators released security images of the vehicle, described only as a white pickup truck that appeared to be carrying a load of mattresses, but did not release a description of the female motorist.

According to police, the driver got out of the truck "and observed the pedestrian laying on the roadway. The driver moved the vehicle out of the roadway, stood around her vehicle for approximately three minutes, then returned to her vehicle and left the location failing to render aid."

A standing reward of up to $50,000 is offered by the city of Los Angeles for information that helps authorities solve a fatal hit-and-run.