Slick roads from Tropical Depression Claudette are likely to blame for a multi-vehicle wreck on an Alabama interstate that killed 10 people, nine of which were children.

More than $300,000 has been raised for funerals and other expenses related to a tragic highway crash in Alabama that left several people dead, including eight children riding in a van for a home for abused and neglected kids.

The children, ranging in age from 4 to 17, were in the van from the Tallapoosa County Girls Ranch — a youth home operated by the Alabama Sheriffs Association that takes in abused and neglected children, including foster children.

The van erupted into flames on Saturday after a multi-vehicle wreck along a wet Interstate 65, located about 35 miles south of Montgomery, as Tropical Depression Claudette ravaged the area. The van was heading back to the ranch after a week at the beach in Gulf Shores.

Ranch Director Candice Gulley was the van’s only survivor. She was pulled from the flames by a bystander. Gulley remained hospitalized Sunday in Montgomery in serious but stable condition. Two of the dead in the van were her children, ages 4 and 16. Four others were ranch residents and two were guests, according to Michael Smith, the youth ranch’s CEO.

A GoFundMe was created Sunday in an effort to raise money to help with the victims’ funeral and medical expenses, as well as grief counseling related to the crash and for the Boys & Girls Ranches of Alabama — which operates four homes throughout the state. It had raised nearly $270,000 within the first 24 hours of being created with the ultimate goal of receiving $500,000.

"The Tallapoosa Co. Girl's Ranch suffered a devastating loss on June 19, 2021. One of our vehicles was involved in a multi-car accident in Greenville, Alabama that took the lives of eight of our precious girls, staff member' children, and relatives," the GoFundMe states. "We are raising money to help with funeral related expenses, medical costs for the injured and counseling for the others of this devastating event."

The youth ranch’s CEO returned from Gulf Shores in a separate van and did not see the crash when it happened. He later visited the accident site on Saturday, saying, "Words cannot explain what I saw." 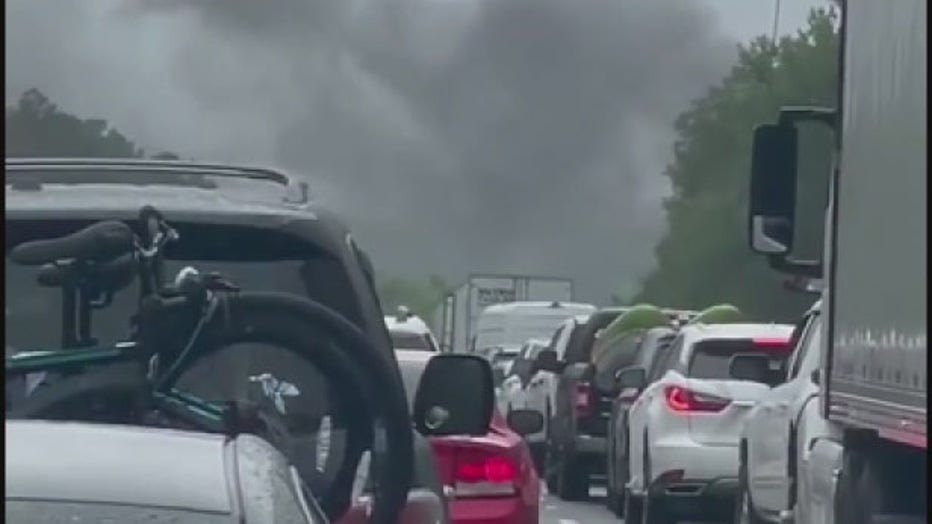 Smoke is pictured billowing from the scene of the crash reported on June 19, 2021, along Interstate 65 near Camp Hill, Alabama. (Photo credit: @AlanaTuckerF / Twitter)

The annual trip to the beach is the highlight of the year at the ranch. It's a new experience for many of the girls, a worker said. Writing on social media ahead of the trip, the employee said the organization wanted "our girls to be able to enjoy all of the things that regular families get to do on vacation" and later posted a photo of girls standing on the beach under a blue sky looking out at the waters of the Gulf of Mexico.

Volunteers delivered food Monday at the ranch, located on a section of a two-lane county highway lined with wooden fences painted white. Sheriff’s cars and orange traffic barrels blocked the road leading to the area where girls live in homes with their house parents.

Students and community members also gathered for a prayer service Sunday at Reeltown High School, the school the girls attended. One of the surviving girls, who was traveling in a separate vehicle, wept as she spoke about her "little sisters," al.com reported.

"When people hear about the ranch, they usually assume that the girls have done something wrong or bad to get there. But that’s not the case," said the teen, who was not identified because she is in state custody.

"These girls have been through so much, and they were such strong, wonderful, kind family members, and it was my privilege and my honor to be their big sister," she said.

She encouraged mourners "to look at somebody and tell them you love them and hold them and squeeze them tight."

"I will never, ever in my life take life for granted because it is so precious. Love is the biggest thing," she said.

The local coroner said the location of the wreck is "notorious" for hydroplaning, as the northbound highway curves down a hill to a small creek. Traffic on that stretch of I-65 is usually filled with vacationers driving to and from Gulf of Mexico beaches on summer weekends.