Protests broke out in Cuba as people demanded freedom and called on the disbandment of the country’s communist dictatorship. President Joe Biden released a statement in solidarity with the thousands of Cubans who protested about shortages and rising prices for food and medicine amid the coronavirus pandemic.

HAVANA (AP) -  President Joe Biden on Monday called protests in Cuba "remarkable" and a "clarion call for freedom," praising thousands of Cubans who took the streets to protest food shortages and high prices amid the coronavirus crisis — one of the island's biggest antigovernment demonstrations in recent memory.

"The Cuban people are demanding their freedom from an authoritarian regime. I don’t think we’ve seen anything like this protest in a long long time, if, quite frankly, ever," Biden said in a brief exchange with reporters at the start of a meeting with mayors and law enforcement officials to discuss gun violence in the U.S.

The comments marked a notable change in tone from Biden's old boss, Barack Obama, who as president sought to ease decades of tensions between Washington and Havana while loosening U.S. imposed economic sanctions. It was an effort that was reversed by Republican President Donald Trump, who partially rolled back Obama's rapprochement, limiting U.S. travel to the island, banning American financial transactions with dozens of enterprises, and more.

"We stand with the Cuban people and their clarion call for freedom and relief from the tragic grip of the pandemic and from the decades of repression and economic suffering to which they have been subjected by Cuba’s authoritarian regime," Biden said in earlier statement on Monday. "The Cuban people are bravely asserting fundamental and universal rights." 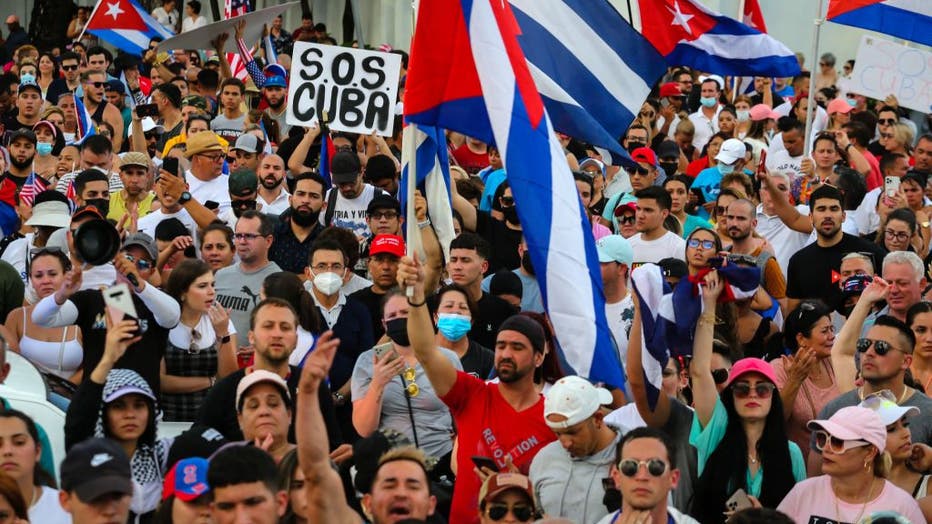 People demonstrate, some holding Cuban and US National flags and placards, during a protest against the Cuban government in Miami on July 11, 2021. - Thousands of Cubans across the country took part in rare protests July 11, 2021, against the communi

Julie Chung, the acting assistant secretary for the department’s Bureau of Western Hemisphere Affairs, on Sunday suggested that the protests were driven by Cuban people exercising "their right to peaceful assembly to express concern about rising COVID case/deaths & medicine shortage. We commend the numerous efforts of the Cuban people mobilizing donations to help neighbors."

But White House press secretary Jen Psaki on Monday sought to frame the protests being driven by far broader frustration, calling the demonstrations "spontaneous expressions of people who are exhausted with the Cuban government’s economic mismanagement and repression."

Psaki added that the U.S. remains ready to assist Cuba in its COVID-19 vaccination effort, but the Cuban government’s decision not to participate in COVAX-- a worldwide initiative aimed at distributing vaccines to poorer nations—complicated the effort.

"We certainly recognize and understand that access to vaccines is one of the issues that a number of individuals on the streets is voicing concern about, but we have to determine what the mechanism would be to work with the Cuban people to get vaccines to them," Psaki said.

The scene of demonstrators on Havana’s Malecon promenade and elsewhere on the island was an unusual scene as the communist leadership has historically shown little tolerance for criticism. Police initially trailed behind as protesters chanted "Freedom," "Enough" and "Unite." One motorcyclist pulled out a U.S. flag, but it was snatched from him by others.

About 2 1/2 hours into the march, some protesters pulled up cobblestones and threw them at police, at which point officers began arresting people and the marchers dispersed. AP journalists counted at least 20 people who were taken away in police cars or by individuals in civilian clothes.

Sen. Marco Rubio, R-Fla., lashed out at Biden for taking a full day to acknowledge the protesters, noting on Twitter that Biden's statement did not describe the Cuba government as " socialist and communist."

"The protests in #Cuba began over 24 hours ago And you forgot something," Rubio said.