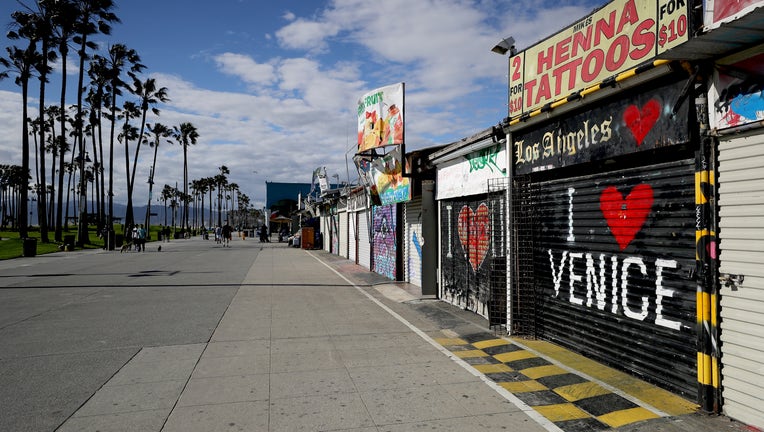 VENICE, CALIFORNIA - MARCH 23: Many shops stand shuttered on the Venice Beach boardwalk on March 23, 2020 in Venice, California. Parking lots at a number of popular beaches including Venice and Santa Monica beaches were closed today after crowds were (Getty Images)

LOS ANGELES - The number of crimes committed in Los Angeles County has declined as people heed stay-at-home orders issued in an attempt to stop the spread of the coronavirus, according to county officials.

"We took a pulse of the overall county crime numbers yesterday, and it was for violent crimes ... a 10% drop and for overall crime throughout the county it was a 6% drop," Sheriff Alex Villanueva said Wednesday afternoon.

The Los Angeles Police Department has also reported a decrease in crime.

LAPD Chief Michel Moore said there has been a reduction in both violent and property crime, as well as a reduction in calls to the police department.

Burglary in Los Angeles is down 16% and personal theft 15%, according to LAPD's communications director, Josh Rubenstein.

Crime is also down in Pasadena, according to Public Information Officer Lisa Derderian.

"Right now, like other cities, we are seeing less crime. But we take into consideration that a lot of businesses, schools and restaurants are closed down and people are staying at home and looking out for each other," Derderian said.

The reduction in crime rates may also be due to an increase in patrol, according to Derderian.

Moore said an increased number of LAPD officers are on the streets because of a switch to 12-hour shifts. He stressed that a 12-hour shift is longer for the officers involved.

Some officers were being provided places to sleep at a police training facility at the end of their shifts, rather than going home, Moore said.