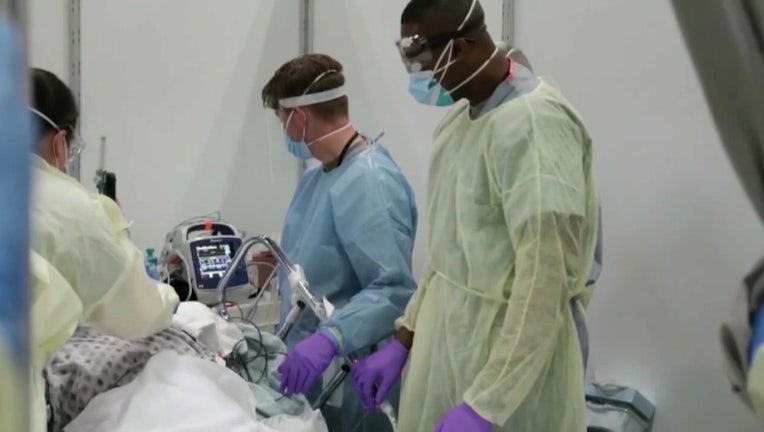 LOS ANGELES - California on Sunday reported another 481 coronavirus deaths, a day after the statewide death toll topped 40,000 even as the rates of new infections and hospitalizations continue to fall.

The number of people in the hospital with COVID-19 slipped below 14,850 statewide, a drop of more than 25% in two weeks, according to the state Department of Public Health.

With hospitalizations and newly confirmed cases falling, health officials are optimistic that the worst of the latest surge is over.

Deaths remain staggeringly high, however, with more than 3,800 in the last week.

Now only New York has more deaths — fatalities there have topped 43,000 — but at the current pace California will eclipse that too.

The positivity rate for people being tested has been falling for weeks, which means fewer people will end up in hospitals.

In Los Angeles County, the state’s most populous, the daily test positivity rate was 9.9% on Saturday, which is down 15 percentage points compared to a week earlier, public health officials said.

Los Angeles County on Saturday reported its second confirmed case of a more transmissible strain of the coronavirus first detected in the United Kingdom.

"The specimen, submitted by a clinical facility, was sequenced as part of routine surveillance by the Los Angeles County Public Health Laboratory," officials said in a statement.

Although there are only two confirmed case of the variant, health officials believe it is already spreading in a county that has surpassed 1.1 million coronavirus cases. The first case was discovered Jan. 16. Although the variant does not appear to make people sicker, it spreads more easily, which could result in more infections, and with them, additional hospitalizations in a region hit hard by the surge.